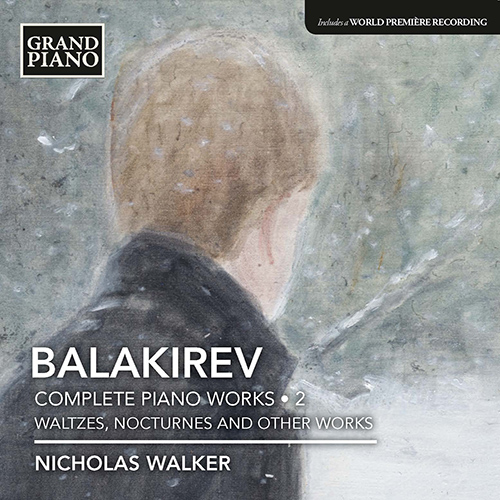 “Although I learnt Islamey as a student, it was many years before I began to examine Balakirev’s other works, a rich revelation of subtlety, virtuosity and poetry; a Russian cocktail of Chopin, Liszt and the Orient. Through these recordings I hope to help restore this neglected composer to his rightful place. In the course of the project I have discovered some completely unknown works, including the Nocturne in G sharp minor (1856) on this disc and the Grande Sonate on Volume 1 (GP636). What is remarkable is that one never tires of Balakirev’s music: the more one plays it, the more one sees in it.” — Nicholas Walker

Waltzes, Nocturnes and Other Works

Mili Alekseyevich Balakirev was the influential leader of the Russian ‘Mighty Handful’ of composers that set the standard by which others were judged. Revealing both Balakirev’s admiration of Chopin and love of music with a deeply Russian character, this programme ranges widely from new discoveries such as the early Nocturne in G sharp minor to one of his last pieces, the heroic Seventh Waltz. There are also beautifully simple gems such as the Chant du Pêcheur and works of technical brilliance such as the Valse de concert and the magnificent and visionary Second Nocturne. “I have no doubt that Walker’s series will replace Paley as the reference set for Balakirev and expect the journey towards its completion will be quite enjoyable.” – American Record Guide

“The skilful virtuosity of Nicholas Walker is wonderful...His communicative enthusiasm distinguishes him from Alexander Paley (a very good recording in Brilliant Classics), more inclined to work the decorative element and therefore necessarily more static. It also imposes itself, from the start, as a reference.” – Classica