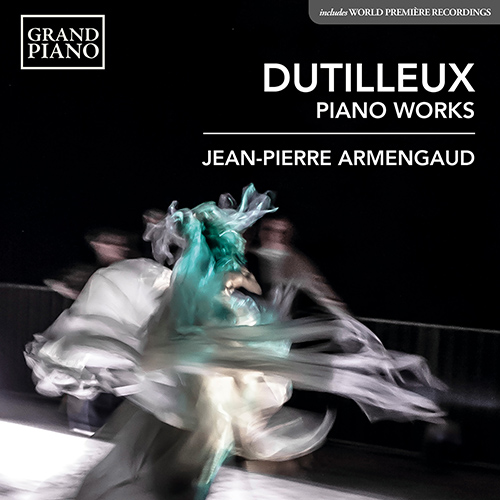 The music in this album spans a forty-year period from 1948 to 1988 and reflects Dutilleux’s stylistic development as a composer. He considered the Sonata to be the first main work in his catalogue and it represents a turning away from tradition and embraces the transformative musical explorations of the day. The Three Préludes are pieces of concentrated atmospheres, ‘a kind of study of timbres’, in the composer’s words, and each are dedicated to a renowned pianist: No. 1 to Arthur Rubinstein, No. 2 to Claude Helffer, and No. 3 to Eugene Istomin. Dutilleux’s lively music for the ballet Le Loup (‘The Wolf’) is heard here in a première recording of the original piano solo version. Jean-Pierre Armengaud is considered a leading interpreter of French music and a specialist in impressionist and expressionist repertoire, and is renowned for his ‘fluidly supple playing, his round and mellow tone’ (Classica). As a concert artist his programmes are notable for the extent and variety of their repertoire. He has appeared in major concert halls around the world, performing in over 40 countries, and given masterclasses at leading conservatoires. His albums for Naxos and Grand Piano feature music by Debussy, Roussel, Poulenc, Aubert, d’Indy, Dutilleux and others. As a musicologist and writer he has published a biography of Erik Satie (Fayard, 2009, which won the 2009 Prix des Muses) and a book of essays on Debussy, Claude Debussy: La trace et l’écart (L’Harmattan, 2018). He has been director for musical programming at Radio France and is associate professor at the Paris-Sorbonne University and professor emeritus at the University of Évry Val d’Essonne at Paris-Saclay University. Born in Angers on 22 January 1916, Henri Dutilleux grew up in Douai, studying piano, harmony and counterpoint at the conservatoire there with Victor Gallois, before moving to Paris in 1933. At the Paris Conservatoire he studied with the Gallon brothers, as well as with Maurice Emmanuel and Henri Büsser, winning the Prix de Rome in 1938 with the cantata L’anneau du roi. Returning to France at the outbreak of war, he worked at the Paris Opéra; then, in 1945, began an 18-year tenure as director of music productions at Radio France. From 1963 he devoted himself to composition, while being in demand as a guest teacher in France and at summer schools abroad. He died in Paris on 22 May 2013.

“…faithful interpretations of the Sonate and the Three Preludes… compelling reason to acquire it.” – Diapason

“In his dazzling triptych Sillages, Aubert reveals himself as Ravel’s “brother in art”...Louis Aubert is our “other Ravel”. Unjustly neglected, it is essential to rediscover his music with this album.” — Classica

“From an interpretive point of view, how can we not be seduced by the subtlety, elegance, delicacy, virtuosity and fluidity of the playing of Jean-Pierre Armengaud… An admirable and rare record…” — ResMusica.com