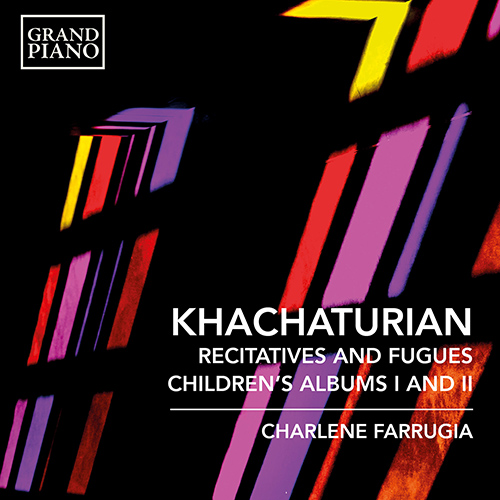 “Music is a physical, mental and spiritual process in which we try to convey a composer's thoughts, transcending personal ego through basing our interpretation on the text before us. I feel very fortunate to have met and collaborated with the producer Ateş Orga, a writer of vast musical knowledge and deep analytical spirit. During one of our many chats, I discovered Aram Khachaturian’s largely unknown Seven Recitatives and Fugues, written in 1928–29 and revised in the late 1960s. Studying them, I was very surprised to discover there were no readily available commercial recordings – at which point I took it upon myself to come to London and repair the omission. The sixth Fugue particularly attracts me – one of the most complex and profound pieces in the collection. My choice of Khachaturian’s Children’s Albums 1 and 2 followed naturally since they harmonise beautifully in the overall mix. There's great melodic music here, from intimacy and folk impressions to imposing statement and majestic polyphony.” — Charlene Farrugia

Recitatives and Fugues • Children’s Albums I and II

Aram Il’yich Khachaturian was considered the ‘mouthpiece of the entire Soviet Orient’ and remains the most renowned of 20th-century Armenian composers. His unmistakable style came with an urge to invent new forms that reconciled Western practice with Eastern idiom. His ‘apprentice’ Fugues were revised and enriched with Recitatives that conjure the colourful voices of Khachaturian’s childhood in Tbilisi. Refreshingly original, amusing and provocative, the Children’s Albums belong to a tradition that reaches back to Bach, Schumann and Tchaikovsky.

Maltese pianist Charlene Farrugia studied with Dolores Amodio, and with Diana Ketler at the Royal Academy of Music in London. For several years she was mentored by Boris Petrushansky. She gained her doctorate in performance under Kenneth Hamilton. With a wide repertory ranging from classical to contemporary, Farrugia made her concerto debut with the Malta Philharmonic Orchestra at the age of 13, playing Mendelssohn’s Piano Concerto No. 1 – the orchestra’s youngest ever soloist. She has since toured widely, engagements taking her throughout Europe to North America and the Far East. In 2018 she received Malta’s International Achievement Award and was made an Associate of the Royal Academy of Music in 2020. An ambassador of EMMA (Euro Mediterranean Music Academy) for Peace, under the auspices of UNESCO, she is currently on the teaching faculty at the Music Academy, Juraj Dobrila University of Pula, Croatia.