Louis Théodore Gouvy was born in the Saarland town of Goffontaine (today Schafbrücke) just east of Saarbrücken, into a French-speaking industrialist family of Walloon origins. Prussian by birth, he had to wait until 1851 to be granted French nationality, by which time he had met the requirement to be resident in France for ten years.

Gouvy began piano lessons with a private tutor at the age of eight, and was educated in France—Sarreguemines, then Metz—developing a keen interest in Classical Greek culture and in modern languages—not only German, which he spoke fluently, but English and Italian as well. In 1837 he went to Paris to study law, continuing his piano lessons with a pupil of the pianist and composer Henri Herz (1803–1888).

Two years later, he made up his mind to abandon any thoughts of a career in the law and to devote himself to music. He explained his plans to his mother: “My goal, my ambition is not to become a teacher or a professional pianist. Music means more to me than that. Last Sunday at the Conservatoire I heard a symphony by M. Reber… Now that’s something I regard very differently than I do the ten digits of M. Liszt; that’s a goal I should truly be proud to achieve.” He began studying harmony and counterpoint with Antoine Elwart, who taught at the conservatoire, and took violin lessons with a young German violinist named Carl Eckert, a former pupil of Mendelssohn. In 1841 he undertook advanced piano studies with Pierre Zimmermann, another teacher at the conservatoire.

The following November Gouvy travelled to Germany, meeting Spohr in Frankfurt and Mendelssohn in Leipzig. On 23 November he reached Berlin, where he met Meyerbeer and Liszt. After visiting Dresden, Prague, Nuremberg and Mannheim, he returned to Goffontaine. On 11 March 1844 in Paris, at a concert in the series known as the Concerts Vivienne, the first public performance of one of his works took place, conducted by Elwart: an Overture for orchestra he had written in Berlin. Two days later, Gouvy decided to travel to Rome. He remained in Italy until May 1845, drawing inspiration from the stimulating and creative circles in which he moved, mixing not only with musicians such as Eckert and the Danish composer Niels Gade, but also with artists. Although Rossini, whom he met in Bologna, advised him to write for the stage, he ultimately chose instead to compose his First Symphony, Op. 9, completed on 12 March 1845. On returning to France, he invested all his energies into getting his symphony performed. It was heard in Paris at a private concert on 7 February 1846, then in public on 17 December 1847, and was very well received by audience and critics alike.

Thereafter, Gouvy would spend his winters and springs in Paris, promoting his music and cultivating his contacts, and his summers and autumns in Goffontaine, composing. He stood out in French musical life as a composer of orchestral and chamber music.

Over the next few years, most of the works he wrote were vocal pieces, both sacred—Requiem, Op. 70 (1874), Stabat Mater, Op. 65 (1875)—and secular, such as the trilogy of dramatic cantatas inspired by Ancient Greece—OEdipe à Colonne, Op. 75 (1880), Iphigénie en Tauride, Op. 76 (1883), and Electre, Op. 85 (1886). All of these were successfully performed in the main musical centres of Germany, Gouvy by then having established many contacts in the country, helped perhaps by the family of his German sister-in-law Henriette (née Böcking), herself a talented musician. Those contacts included such eminent names as Hiller, Reinecke, Gernsheim, Clara Schumann, Bargiel, Brahms, Joachim and Bruch. Tchaikovsky met Gouvy at Reinecke’s home and later described him as entirely “Germanized”, adding, “Perhaps M. Gouvy has good reason to complain about France, but it was painful for me to hear him praise all things German at the expense of all things French”. This notwithstanding, Gouvy was elected to the Académie des Beaux-Arts in Paris in 1894 on the death of Anton Rubinstein, and to the König-Preussische Akademie in Berlin in 1895. He died in Leipzig on 21 April 1898. 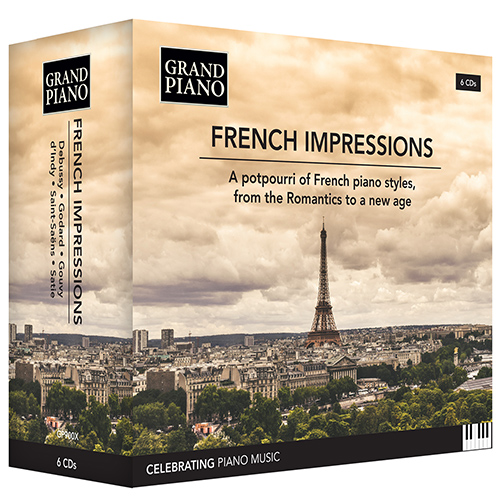