The composer, violinist and teacher Nikolai Roslavets was born in Central Ukraine and studied at the Moscow Conservatory, where his teachers included Ippolitov-Ivanov and the violinist Hrímalý. He graduated with a composition based on Byron’s Heaven and Earth and embarked, with the help of his parents-in-law, on a career as a free-lance composer and music critic. He collaborated with other leading young composers, including Myaskovsky, in the foundation of a group that in 1923 was to become the Association for Contemporary Music. After the February Revolution of 1917 he joined the Socialist Revolutionary Party, and in 1918 was a member of a group affiliated to the Bolsheviks, breaking off his connection in 1921. He did much in the following years to promote the cause of contemporary music, notably as a leader of the Association for Contemporary Music, while defending traditional musical training and earning the condemnation of the Association of Proletarian Musicians, who stigmatized him as a formalist, class enemy, Trotskyite and anti-Soviet.   In 1931 he moved from Moscow to Tashkent, where he worked as a conductor, composer and director at the Music Theatre. Two years later he returned to Moscow, where he had difficulty in keeping body and soul together, proscribed by the Soviet authorities, but was teaching privately. At his death in 1944 many of his manuscripts were seized by the secret police, but others were preserved by his widow and by one of his pupils. Perestroika has allowed a revival of interest in his work.

A victim, in common with other innovative composers in Russia, of the political dispute between the avant-garde Association for Contemporary Music and the powerful populist Association of Proletarian Musicians,  Roslavets devised a new system of tonal organization with a technique of synthetic chords, a phrase taken from Scriabin, consisting of between six and ten notes, in a technique that has been compared to the twelve-tone system developed by Schoenberg. He remains one of the most important and one of the most neglected composers of his generation in Russia. At one time a leading musical revolutionary, the so-called Red Schoenberg, for the last ten years of his life he was virtually a non-person, his music unheard and his name, officially at least, largely forgotten. 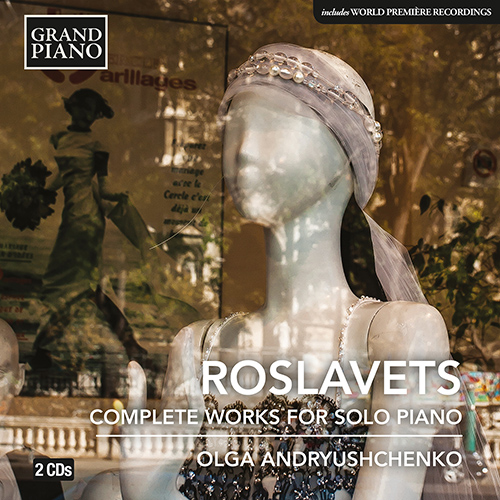