Best known as the extraordinarily inventive and prolific author of over sixty books, Anthony Burgess originally set out to be a composer and regretted that his writings overshadowed his music: “I wish people would think of me as a musician who writes novels, instead of a novelist who writes music on the side”, as The New York Times quoted him in 1970. During World War II, he was the arranger/pianist for a military entertainment troupe called The Jaypees, and later composed sonatas, songs, and marches while stationed in Gibraltar for three years with the British army. After the war, fruitless efforts to promote his music and pursue graduate study in composition thwarted his attempt at a professional musical career. His first wife, Llewela Jones, known as Lynne, adamantly opposed his composing, further impeding his musical aspirations. When the BBC rejected his Passacaglia for Orchestra, she issued an ultimatum offering him one last chance to compose a successful work or else abandon music as a career. According to Little Wilson and Big God, the first volume of Burgess’s autobiography, he set to work on an opera, The Eve of Saint Venus, the story of a statue of Venus that comes to life, but only managed to complete the text. Accepting Lynne’s ultimatum, he gave up music and turned to writing instead, producing his first novels in the early 1950s.

After fourteen post-war years as a teacher, first in various English villages and later in the British colonies of Malaya and Brunei, John Burgess Wilson gradually established himself as a writer, adopting the pen name Anthony Burgess when Time for a Tiger, his first published novel, was issued in 1956, since British civil servants were discouraged from publishing fiction under their actual names. His reputation as a writer rose steadily throughout the following decade with the publication of more than twenty books between 1960 and 1970. When the cinematic version of A Clockwork Orange hit the screens in 1971, Burgess’s fame skyrocketed. Thanks to the notoriety of Stanley Kubrick’s film and Burgess’s entertaining personality, he became a frequent presence on television in Europe and North America and one of the world’s most famous living writers.

Burgess’s lifelong fascination with the interrelationship of music and literature led him to write novels based on musical forms. A Clockwork Orange and Tremor of Intent are structured in sonata form while Nothing Like the Sun, “A Story of Shakespeare’s Love-life” filled with musical references, is like a dual suite composed of two unequal halves, with each chapter in Part II twice as long as its counterpart in Part I, as if played with repeats. The novels A Vision of Battlements, The Malayan Trilogy, Earthly Powers, Any Old Iron, and Byrne all contain characters who are composers or professional musicians, while music lies at the heart of books like The Pianoplayers, a tribute to his father Joseph Wilson, who played the piano professionally in British pubs and silent movie houses, and This Man and Music, a musical autobiography and collection of essays mostly on music.

Napoleon Symphony is one of Burgess’s most audacious attempts to convert music into literature. Upon reading this fictionalised life of Bonaparte modeled upon Beethoven’s Eroica Symphony, James Dixon, conductor of the University Symphony Orchestra of the University of Iowa, contacted Burgess and invited him to send a composition for his orchestra to play, either an existing work or a new one. Having composed two previous symphonies, both lost—one in Manchester as a teenager and a second in Malaya—Burgess decided to compose a third symphony for Dixon. Burgess called the première, which Dixon conducted in Iowa City on 22nd October 1975, “the truly great artistic moment” of his life. From that point on, Burgess composed at a furious pace as if making up for the prior decades in which music had taken a back seat to literature.

From 1975 until his death in 1993, Burgess wrote concertos for piano, violin, oboe, cor anglais, solo guitar, and guitar quartet, a piano concertino, a rhapsody for tuba and orchestra, a string quartet, and a set of twenty-four preludes and fugues. He turned Joyce’s Ulysses into the operetta Blooms of Dublin, wrote the words and music for a musical titled Trotsky’s in New York!, and composed the score for a stage version of A Clockwork Orange. He penned overtures for Glasgow and his native Manchester, sinfoniettas celebrating Strasbourg and his second wife Liana Macellari, cantatas on texts by John Dryden and Gerard Manley Hopkins, and chamber settings of verse by T.S. Eliot, D.H. Lawrence, A.E. Housman, and his own fictional poet F.X. Enderby. He wrote a film score, music for brass band, two quartets for winds and strings, an elegy for string orchestra on the death of Princess Grace, sonatas for recorder, studies and concert pieces for oboe and English horn, pieces for harmonica, and choral works and songs to verse by Shakespeare, Nashe, Hardy, D’Annunzio, Pound, and Joyce.

Burgess composed in a vigorous, angular, mostly tonal but sometimes dissonant style—a hybrid of Holst and Hindemith. Much of his music is contrapuntal, with fugal passages in many of his works. Harmonically, his music tends towards dense sonorities built on 4ths; melodically, 4ths and 2nds predominate. Some compositions reflect the influence of jazz, blues, and popular music, but not rock and roll, which Burgess abhorred. Rhythmic vitality and metric ambiguity are characteristic of numerous compositions. He wrote quickly, completing works such as Master Coale’s Pieces and the Guitar Quartet No. 1 within a few days, and frequently reused themes and material from his older compositions. His talent as a parodist is evident in his faux-Elizabethan ballet score Mr W.S., the English music hall style in Blooms of Dublin, and the Beethovenian score to the Singspiel version of A Clockwork Orange.

Relatively little of Burgess’s music has been recorded. In 1996, the Aïghetta Quartet, a Monaco-based guitar quartet, released a compact disc of Burgess’s three guitar quartets titled Burgess: Musique d’un écrivain anglais sur la Riviera, having previously included each of the first two on a pair of compilations of compositions by multiple composers. Recordings of recorder and piano music by Burgess were issued in 2013 and 2015, respectively. 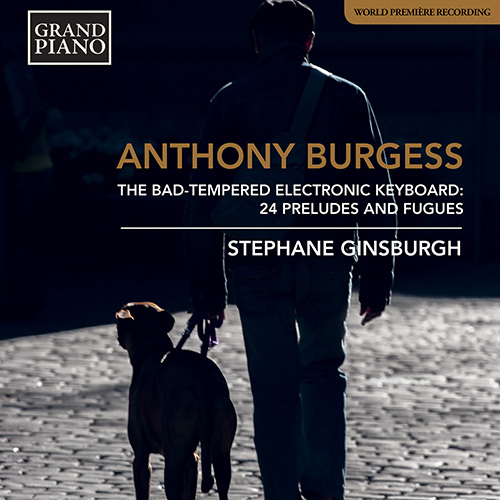