Arno Babadjanian was born in Yerevan, Armenia on 22 January 1921. His earliest musical influences came from his home. His father was an accomplished folk musician, capable of a variety of folk instruments. During childhood, Babadjanian witnessed the Westernisation of music in Armenia: with the creation of the Armenian Philharmonic and the Union of Armenian Composers was formed in 1932; the opening of the Opera Theatre in Yerevan in 1933; and the première of Aram Khachaturian’s Symphony No. 1 in 1934. Babadjanian’s first formal lessons were at the Yerevan Conservatory with Vardkes Talian (1896–1947). Talian instilled a sense of Armenian musical history in Babadjanian by insisting that his young student study the folk traditions of his country, in addition to the music of the great Armenian composer and ethnomusicologist, Vartabed Komitas (1869–1935).

Babadjanian graduated from the Yerevan Conservatory in 1947, and entered the Moscow Conservatory a year later to study the piano with one of Russia’s great pianists, the legendary Konstantin Igumnov (1873–1948). A student of Alexander Siloti, Anton Arensky, Sergey Taneyev and Mikhail Ippolitov-Ivanov, Igumnov passed a musical tradition to Arno Babadjanian that few were lucky to experience. Under Igumnov’s guidance, Babadjanian studied Bach’s Well Tempered Clavier, Beethoven’s sonatas, Chopin’s piano works, and the works of the great Russian composers, Rachmaninov and Scriabin. These were formative years for Babadjanian, who, as a result of his God-given talents and rigorous schooling, became an extraordinary pianist. Concurrently with his studies at the Moscow Conservatory, Babadjanian studied composition with Heinrich Litinsky (1901–1985) at the House of Armenian culture in Moscow Litinsky was one of the most influential composer-teachers in the Soviet Union who contributed several important text-books on polyphony (Problems in Polyphony) (three volumes) and Imitation in Strict Counterpoint). He also taught over two hundred pupils, including Aleksandrov, Arutyunian, Khrennikov, Mirzoyan, and Peiko. In addition to being a brilliant teacher, he was an ethnomusicologist, who imbued his students with a love for their native folk-music. Babadjanian composed his expressive and powerful Polyphonic Piano Sonata in 1946 while studying with Litinsky.

In 1950 Babadjanian returned to Armenia where he taught the piano at the Yerevan Conservatory (1950–56), and also gave concerts and composed. It is during this period that he wrote one of his most celebrated works, the Heroic Ballade for piano and orchestra (1950). This Romantic work is a series of picturesque symphonic variations rooted in Armenian folk-lore and pianistically close to the Rachmaninov’s keyboard style. Always aware of his national roots, Babadjanian collaborated with Arutyunian in 1950 and created another of his most popular works, the Armenian Rhapsody for two pianos.

Babadjanian was not a prolific composer; he spent much of his time teaching and giving concerts. His extraordinary Piano Trio was competed in 1952 and was followed in 1954 by his orchestral Poem-Rhapsody. The Sonata for Violin and Piano was produced in 1959, followed by the Cello Concerto, which was written for and dedicated to Mstislav Rostropovich. Among his last compositions were the Six Pictures for Piano (1965), the Third String Quartet (1979) and the Nocturne for piano and symphonic jazz ensemble (1981). Arno Babadjanian died in Moscow on 15 November 1983. 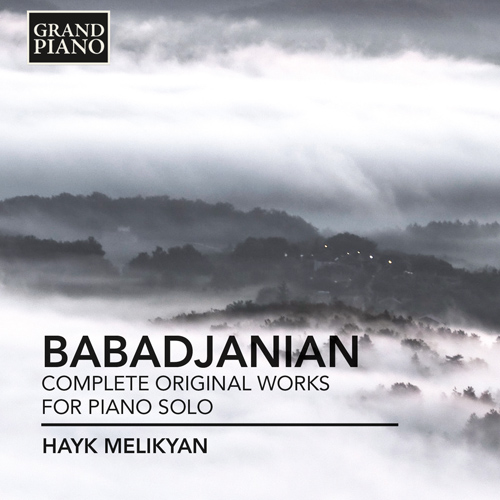