Murad Magomedovich Kazhlaev was born in Baku, Azerbaijan, in January 1931, the son of an ENT specialist. He studied at the Azerbaijan State Conservatory, initially in the junior school (1938–49) and then in the senior faculty (1950–55), graduating from the composition class of Boris Zeidman (1908–81), a Leningrad student of Maximilian Steinberg (Rimsky-Korsakov’s son-in-law), the teacher of Shostakovich and Shaporin. He worked additionally with the Dagestani pioneer Gotfrid Hasanov and pursued conducting under Niyazi (Zulfigar oglu Tagizade Hajibeyov, 1912–84), for nearly fifty years the iconic music director of the Azerbaijan State Symphony Orchestra. Kazhlaev’s ethnicity is Lak, one of the tribal peoples of Dagestan.

A skilled pianist (he knew Richter, a patient of his father’s, frequently driving him around old Baku), Kazhlaev settled in Makhachkala, Dagestan’s fortress capital, in 1955. Here he taught theory, cofounded the Dagestan Composers’ Union (having been elected to the USSR Composers’ Union in 1954, while still a student), and directed the Dagestan Radio Symphony Orchestra (1957–63). Recipient of the Glinka State Prize (1970) and People’s Artist of the USSR (1981), he moved to Moscow in January 1989, taking up an eighteen-year appointment as artistic director and conductor of the prestigious Academic Grand Concert Orchestra of State Radio and Television (latterly the Yuri Silantyev Academic Grand Concert Orchestra), Russia’s flagship popular music, big band, variety and and jazz outfit but with a programming policy embracing also classicoromantic repertory and contemporary premieres. In 1993 he was appointed professor of composition at the State Rachmaninov Conservatoire, Rostov-on-Don. In January 2016, on the occasion of his 85th birthday, he was created an Honoured Artist of Dagestan.

Kazhlaev’s catalogue ranges from nationalist orchestral works to circus numbers, ballet to operetta, musical to revue commissions to songs and romances—all overtly harmonic, tuneful and vibrantly imagined. His jazz, big band, light music and film output, getting on for two hundred scores, affirms the studio professional working against the clock. Teeming with pigment, atmosphere and show-stopping numbers, the spectacularly orchestrated 1968 Dagestani ballet Gorynka (The Mountain Girl), produced at the Kirov (Mariinsky Theatre) with Barïshnikov, compares more than favourably with Khachaturian’s wartime Gayane: a veritable banquet of lyric chorus and percussive attack, nasal reeds and Caucasian trumpet, with shards of Rachmaninov and Sacre adding black powder to the cocktail. 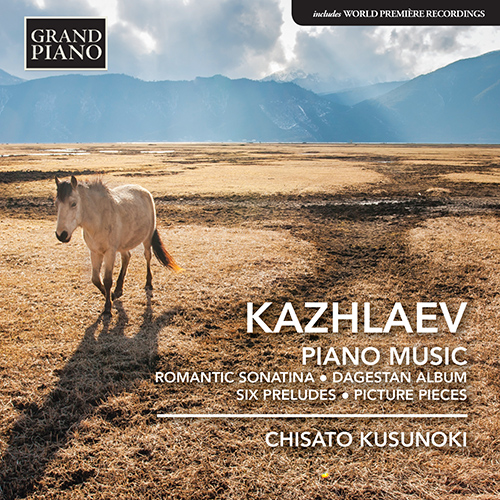