Among the first generation of composers and folk song collectors in Armenia, Nikoghayos Tadevosi Tigranian (1856–1951) stands alongside other important figures such as Komitas Vardapet, Tigran Chukhadzhian, Kristapor Kara-Murza and Makar Ekmalian. It was Tigranian and his colleagues who began the systematic collection of folk songs and dances, and laid the foundation of an Armenian national style.

Tigranian was born on 31 August 1856 in Alexandropol (now Gyumri, the second largest city in Armenia), one of ten siblings. His father, Tadevos Nazareti, was a military man, and his mother, Yeranuhi Gorovants, was well-educated. Tigranian lived most of his life in the city, which was particularly famous for its rich folklore, the living tradition of folk singing and the ashug culture which had emerged from the music of popular bards and troubadours around the 16th to 18th centuries. His parents were themselves interested in both Eastern and European music, the latter of which was gradually reaching the Caucasus.

While Tigranian showed early musical promise as he began his school studies, he contracted smallpox when he was nine years old and lost his sight. His parents, fearing for his fate in a city without schooling for blind children, resolved to find a means to educate him at all costs, and began to look further afield. In 1874, the International Sanitary Congress was held in Vienna, and Tigranian’s parents took him to it, hoping that specialists might offer some hope for the restoration of his sight. The doctors were unable to help, and recommended that he be sent to the Viennese Institute for the Blind. Tigranian’s parents fought their way through various administrative hoops in order to secure him a place, and he was finally given the opportunity to study there. Not only did this provide him with an extensive secondary education, he was also given lessons by Wilhelm Schenner of the Vienna Conservatory, studying music theory, harmony, composition and piano. He studied particularly hard as a pianist, working on repertoire from Bach to Liszt, and took extracurricular courses in violin playing and instrument restoration.

In 1880, Tigranian returned to Alexandropol and threw himself into the collection and study of local music, from sazandars, singers and ashugs—performing musicians, often working in small ensembles with traditional instruments. Tigranian’s skilful transcriptions preserve the intonation and rich metric patterns of this music, while making them accessible to music professionals not only in Armenia and Russia, but in Western Europe as well. Over the next ten years, he transcribed many mugams, which draw together poetry and instrumental improvisation which have been passed down through an oral tradition. In this undertaking he was much assisted by his uncle, Agamal Melik-Agamalian, who was a famous tar player (a long-necked stringed instrument related to the guitar), with a fine knowledge of important melodies. Tigranian recorded and transcribed all of his uncle’s mugams, such as Bayati-kurd, Bayati-shiraz, Nouruz Arabi, Shakhnaz, Gidzas and Heydari. At the same time, he began to compile arrangements of Armenian folk dances for piano.

In 1893, now in his late 30s, Tigranian travelled to St Petersburg to study with the Conservatory professor Nikolai Soloviev. He also took the opportunity to study the works of the leading Russian composers of the century—Glinka, Borodin, Mussorgsky, Rimsky-Korsakov—and in the late 1890s he toured Russia, Georgia and Armenia as a concert pianist. His programmes often included his folk dance and mugam transcriptions. In 1899, he first met Komitas Vardapet (often considered the father of Armenian art music), and the two men became great friends, spending days at a time in discussion of the style and form of Armenian music. Komitas told him, at every meeting, ‘I come to use the musical treasury of Nikoghayos Tigranian.’ In turn, Tigranian remarked, ‘I do not know anyone like Komitas who would feel and understand the spirit and character of our folk music so deeply.’

Tigranian’s career was rich and varied. An outstanding composer, ethnographer and pianist, he was an expert on the music of several regions besides Armenia (including Georgia, Persia and the music of the Tatars), and taught and wrote extensively about these subjects. His pioneering work in recording and transcribing Armenian music was to have a significant impact on both the understanding of local folk traditions and the development of Armenian art music informed by these folk roots. His younger contemporary Aleksandr Spendiarian (Spendiarov) dubbed him ‘the great musician-orientalist’. In 1922, Tigranian opened a school for blind children in his home town of Gyumri, and was appointed its principal. He died in 1951 at the age of 94. 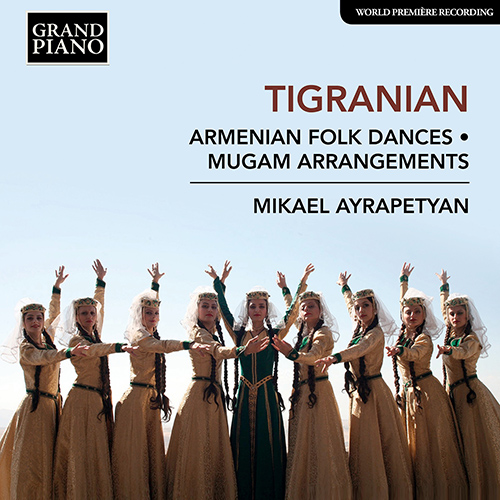