Raymond Charles Hanson was a highly gifted, prolific Australian composer whose career spanned a diverse and complex era in Australian music history. A largely self-taught creative visionary, his career was negatively impacted partly by the lack of support for Australian composers in the first half of the 20th century. Nonetheless, he became the leading lecturer in composition at the New South Wales State Conservatorium of Music and was later appointed a Member of the Order of Australia. The sophistication and originality of his piano compositions is especially remarkable considering how little formal training he received. During his lifetime, his piano works were performed by several renowned pianists, including Walter Gieseking, Rudolf Firkušný and Ignaz Friedman. The body of work he composed for the piano is unique and unparalleled in 20th-century Australian piano repertoire.

Hanson was born in Burwood, Sydney on 23 November 1913, the youngest of five children. He had a religious upbringing, and at one point wanted to become a missionary. He retained an interest in spiritual matters throughout his life, becoming fascinated by the writings of Indian poet Rabindranath Tagore, and setting many of his texts to music, including the Gitanjali poems in his oratorio The Immortal Touch. Composing and playing the piano started at an early age. His introduction to the piano occurred through hearing his older sister play, and he was later given lessons by Anne Spillane. Due to the family’s lack of finances, he received free piano lessons. Hanson completed just three years of high school before he had to leave to earn a living teaching piano and doing odd jobs.

Despite these humble beginnings, Hanson emerged as a concert pianist in the 1930s, playing his own compositions as well as traditional repertoire. He won the Gordon Vickers Scholarship to study composition at the NSW State Conservatorium of Music, but two months later, these studies were interrupted by the Second World War. Joining the Army in 1941, he spent almost two years on an Army base in Tasmania, where he was promoted to Sergeant. Hanson was extremely productive during the years 1939–49, writing some of his most significant piano works in this period. The American servicemen he met in Tasmania brought him into close contact with jazz, which had a lasting influence on him as a performer and composer. In 1946, Hanson resumed his studies at the Conservatorium with Dr Alexander Burnard. He was granted a fellowship in 1948 and taught composition, harmony, orchestration and piano. In 1956, he married Moira Young, a violin student at the Conservatorium; they had three daughters. Hanson was passionate about social equality and believed music should be accessible and non-elitist. He was involved in union concerts, playing for dock and railway workers. As well as mentoring classical composers, he was much sought after by leading figures in the Sydney jazz scene for guidance in composition.

Hanson taught and mentored some of Australia’s most influential musicians, including Larry Sitsky, Roger Woodward, Don Burrows, Nigel Butterley and Richard Meale. Hanson died in 1976, leaving behind a substantial legacy which includes concertos for piano, trumpet, trombone and violin, orchestral works, film scores, songs and choral works, operas and chamber music. This is the first recording of his complete piano works. 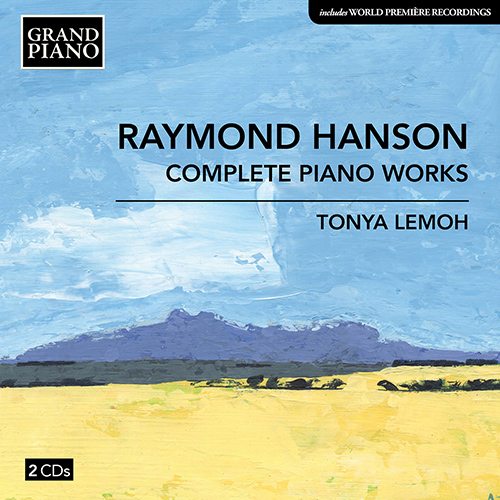