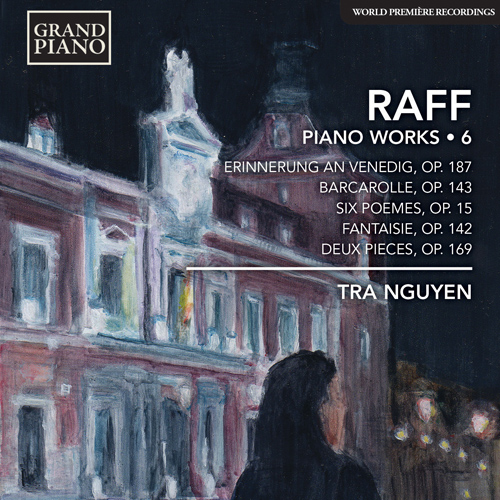 “Raff's Piano Works vol.6 takes us across his piano oeuvre, mixing early works and more mature compositions like Fantasy op.142 and Memories of Venice op.187. These are works of great emotional density where Raff fused his supreme melodic skill with complex harmonic and contrapuntal structure. For me, Thomas Mann's Venice it may not be but Guardi's dramatic and richly colourful Rialto Bridge consistently links and sums up the beauty of Raff's writings in this volume.” — Tra Nguyen

Each piece on the sixth and final volume of this series demonstrates different aspects of Raff’s genius as a composer for the piano. The melodic richness of the early Six Poèmes, dedicated to Liszt who had rescued Raff from penury, contrasts with the deftly evocative scene-setting of Erinnerung an Venedig, which recalls a holiday in Venice. The intensely lyrical Fantaisie is complemented by the languid charm of the Barcarolle, and the recording closes with a virtuosic Valse brillante.

“There is some lovely music here, and pianist Tra Nguyen plays it with admirable loveliness. ” – The Buffalo News