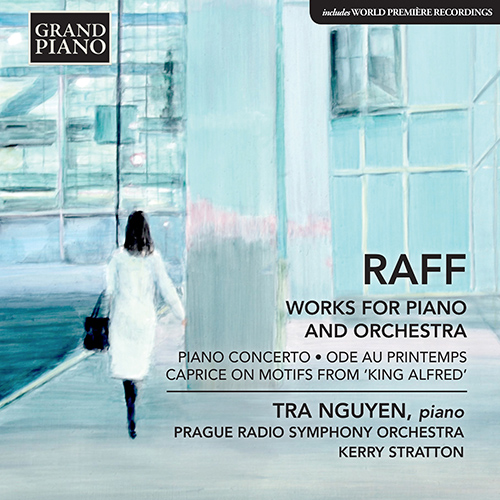 “This CD explores the synergy of Raff’s symphonic gift and pianistic elegance combined in one album. The dialogues between the piano and the orchestra in Ode Au Printemps and the Piano Concerto are lush with colours and shades to carry out the emotional gravitas, especially in the latter. World-première track Caprice on Motifs from Raff’s opera King Alfred gives us a glimpse into his operatic work through the composer’s own pianistic lens, often seen with an understated sense of humour.” — Tra Nguyen

Works for Piano and Orchestra

Of Raff’s nine works for solo instrument and orchestra three are for piano. The Ode au Printemps, Op. 76 is full of freshness, its atmospheric qualities and cantabile melodies enhanced by superb orchestration. Unjustly neglected but full of dreamlike delicacy, the Piano Concerto in C minor, Op. 185 offers one of the most delightful, lyrical and stirring works in the Romantic concerto canon. The Caprice, Op. 65, No. 2 balances assured development and passionate virtuosity.

“[Tra Nguyen is] a stylish, technically assured soloist: dazzling in the flourishes, articulate in the passage work, and capable of changing moods on a dime.” – Positive Feedback Online

“This is undoubtedly one of the most convincing Raff recordings in recent years. Everything impresses. Tra Nguyen’s technical mastery and feeling for Raff’s music has never been so convincing, and Kerry Stratton and the Prague Radio Symphony Orchestra not only offer solid to robust support, Stratton also brings every detail of Raff’s refined orchestration to the fore. ” – Stretto