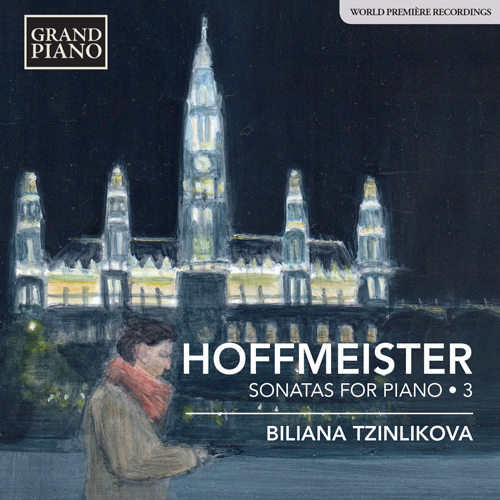 “Franz Anton Hoffmeister, a contemporary of Mozart and Beethoven, was a successful composer and publisher in Vienna’s “age of copyists”. His keyboard sonatas are full of exuberant energy and charming melodies. They represent the lifestyle of the wealthy and educated class of the late Rococo and show Hoffmeister’s rank as a classical composer in the best sense of the word while preparing the ground for the music of the Romantic era that was to follow.” — Biliana Tzinlikova

Franz Anton Hoffmeister occupied an important place in Viennese musical and cultural life. He was much respected as a publisher – his firm published works by Mozart and Haydn, and he was friendly with Beethoven – but also as a composer. He wrote at least eight operas, a substantial number of symphonies, and a large amount of music for the flute, a popular instrument amongst the wealthy amateurs of the time. He also wrote expressively and rewardingly for the piano, which had a similarly wide audience. This is the third and final volume in the series of the first complete recording of Hoffmeister’s sonatas ever to be released. “Biliana Tzinlikova is an excellent advocate for Hoffmeister’s music. Her playing captures the energy and sparkle of Hoffmeister’s style, and she has a winning combination of an agile technique and a warm, singing tone. This recording, and Tzinlikova’s entire Hoffmeister series, is a delight through and through.” – Fanfare

“Fast movements are the most attractive and complex in figuration, with a fair bit of imitative counterpoint. Particularly fetching is the zany, off-kilter phrase lengths in I and III of the C-major Sonata, the second on the program. This last volume of Grand Piano’s Hoffmeister series has excellent close sound and alert, committed performances by Ms Tzinlikova.” – American Record Guide

“...Biliana Tzinlikova's delightfully brilliant playing... An enrichment not only for connoisseurs.” – DrehPunktKultur