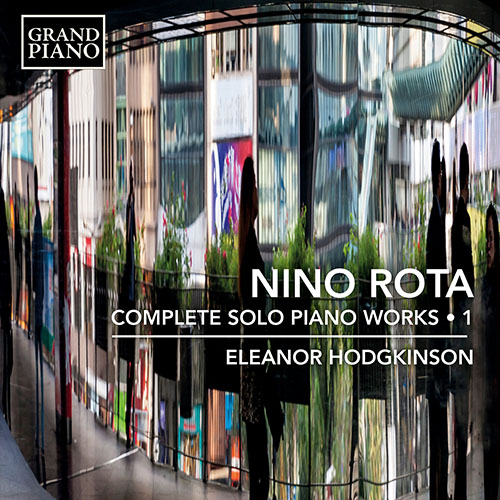 Nino Rota embraced neo-Classical, neo-Romantic and even neo-Baroque affiliations. His music prized melodic directness and communicative generosity and it is not therefore surprising that he should be best known for his epochal film scores—the music for The Godfather pre-eminently.

Nino Rota’s 15 Preludes utilise melodic and harmonic explorations to chart music that is agitated and melancholic, but also joyous and comedic. The Fantasia in G comprises seven themes—folkloric, droll and ultimately heroic. A late work, the 7 Pezzi difficili per bambini is generous in its emotional directness. Pianist Eleanor Hodgkinson divides her time between performing, teaching, examining and writing. A versatile chamber musician, she has been part of numerous collaborations and given many premieres of British music. Notable partnerships include those with the Villiers Quartet, cellist Nick Stringfellow and pianist Jakob Fichert. From 1999 to 2004 she was a member of the Elgin Piano Trio, performing to acclaim throughout the UK. Solo recital work has taken her to North America, Denmark, Holland, Germany and France. Orchestral piano work has led to frequent engagements with Mid Wales Opera, Southern Sinfonia and Orchestra of the Swan including commissions, broadcasts, recordings and education projects. With Orchestra of the Swan, she recorded the chamber version of Mahler’s Das Lied von der Erde for Somm Recordings in 2010, and in 2015 was part of a music and poetry presentation of Messiaen’s Quartet for the End of Time with actress Harriet Walters given at the Stratford-upon-Avon Literary Festival. The core aspects of Rota’s compositional ‘fingerprints’ include the attention he gave to his pre-eminence of melodic line, a harmonic language that supports and drives the music to structural points, multiple stylistic influences that exist within an intertextual framework, and an immediacy in the projection, and importantly in the communication to the listener, of differing emotions in the music. Rota’s works could be placed within a broad neo-Classical perspective, though certain works are clearly neo-Romantic or neo-Baroque.

“Ms Hodgkinson plays all beautifully, with a solid warm tone that draws the listener into the music. The sound is exceptional. I enjoyed this.” – American Record Guide

“Makes for compelling and unexpected listening, and the works are most enjoyable.” — Records International

“German born and London based pianist Kusunoki is certainly at one with the composer.” — American Record Guide