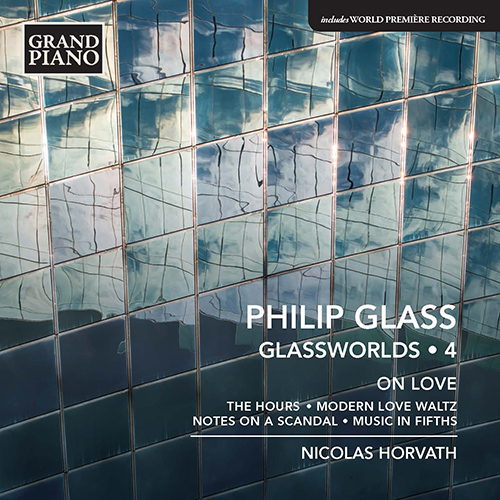 This volume focuses on love, one of Philip Glass’ most glorious themes. The timeless melancholy of his BAFTA award-winning music for The Hours forms an organic suite driven by the film’s three powerful characters, here complete with three unpublished movements. The breathtakingly energetic Modern Love Waltz expands the limits of minimalism by combining Glass’s style with Viennese dance tradition, while his transcription of Notes on a Scandal is a recording première. Steve Reich described the iconic Music in Fifths as being “like a freight train”.

“As performed by acclaimed pianist Nicholas Horvath, these works are evocative, cinematic and filled with a pathos that defies easy definition.” – Scene Magazine

“Horvath’s playing, always unhurried, ensures that the desolation of ‘Why does someone have to die’ emerges as the emotional hub. It is fascinating to hear Glass’s take on Viennese Waltz (the 1977 Modern Love Waltz); and to have the world premiere of the composer’s own 2007 transcription of Notes on a Scandal, a fascinating, enigmatic piece. …Horvath brings an unremittingly hard touch to the hypnotic Music in Fifths. Glass enthusiasts need not hesitate.” – International Piano

“Production values are very good: the Fazioli piano sounds quite beautiful, and the notes are informative…I will certainly be seeking out the earlier releases in this series.” – MusicWeb International