Adolf von Henselt was born in the Bavarian town of Schwabach on 9 May 1814. Praised by Liszt for his unequalled cantabile playing, Henselt belonged to a galaxy of star pianists who were all of a similar age. These included Chopin, Schumann, Thalberg and, of course, Liszt.

Although Henselt began his musical studies on the violin, he soon changed to the piano and made spectacularly rapid progress. It was as a child that he developed a strong and permanent affinity with the musical Romanticism of Carl Maria von Weber. After studying with Johann Nepomuk Hummel in Weimar and Simon Sechter in Vienna, he withdrew from the limelight for two years in order to perfect his unique way of playing widely spaced chords without recourse to the sustaining pedal. In view of the permanent damage that Robert Schumann reportedly did to his own hands while experimenting with stretching exercises, Henselt must surely have been taking a huge risk in persevering with his idiosyncratic technique. But his determination seems to have paid off, for even Liszt is said to have blanched at certain aspects of Henselt’s piano playing that bordered on the reckless.

For all his prowess at the keyboard, Henselt always suffered badly from stage fright, and when he was 22 he suffered a nervous breakdown. Diagnosed with severe strain from overwork, he was advised to take things easy for a while, so he travelled to Carlsbad (Karlovy Váry) in the hope that the pleasures of this Bohemian spa town would act as a tonic and aid his recuperation. Nineteenth-century sources maintain that he met Chopin here, but there is scant evidence to back up such a claim. In other respects, however, the year 1836 did prove to be auspicious for Henselt because he made the acquaintance of Rosalie Vogel, the wife of a Weimar court physician. By degrees, she impressed herself upon him so much that they became musical, and then physical, soulmates. As might be imagined, Dr Vogel was far from pleased, but he was powerless to prevent the lovestruck pair from marrying in the autumn of the following year.

In 1838 Henselt moved to St Petersburg after making a great impression on the tsar’s daughter, Maria Pavlovna, who like himself was a pupil of Hummel’s. His new appointment coincided with a flurry of compositional activity that was fuelled by his continuing enchantment with Rosalie.

Over the next few years Henselt’s public performances became fewer in number and he also wrote less music. His time was largely taken up with teaching in the imperial household and travelling throughout Russia as inspector general of music schools and teaching academies. Along with his colleague Anton Rubinstein, he was important in establishing a truly Russian school of piano playing, which was later so notably represented by Sergey Rachmaninov.

In 1889 Henselt (now sporting an aristocratic ‘von’ before his surname), died in the Silesian spa town of Warmbrunn (Cieplice). An obituary in The Musical Times mentions his English visits of 1852 and 1867, and reports that during the second one he refrained from playing in public. This reluctance to perform supports the view that he never fully overcame his chronic stage fright. However, despite this handicap and his heavy workload in Russia, he did compose a small number of works during the 1850s. 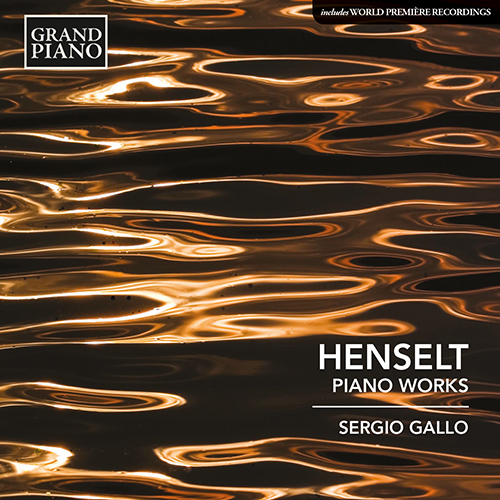