Teresa Carreño’s immense musical talent became apparent at an early age. She was born in Caracas; her father Antonio, himself the son of a composer, took great pains to maintain his skills as a pianist besides his main career in politics as Venezuela’s Minister of Finance. He thus became her first teacher, but realised soon enough that he was not able to keep up with his daughter’s rapid progress as a pianist, and also given the fact that Teresa presented her own compositions for piano as early as the age of six. The family showed extraordinary support in furthering the highly gifted Teresa’s musical education, moving even to New York in 1862 (the move was, however, also a result of political changes taking place in Venezuela) in order to enable her to receive both an adequate musical education and pave the way for an international career and to give her the opportunity to perform in renowned concert halls. Teresa’s début at Irving Hall during the same year did not go unnoticed by the great pianist and composer Louis Moreau Gottschalk (1829–1869), who henceforth gave her lessons. Teresa’s first published composition is dedicated to him: The Gottschalk Waltz, Op 1.

Teresa Carreño followed up the successful series of New York concerts with twelve sold-out performances in Boston in the following year. Enchanted critics celebrated the nine-year-old girl, who had trouble climbing onto the piano stool but then brilliantly performed compositions by both her teacher and Franz Liszt, surpassing the virtuoso-composers themselves. Her first public performance with an orchestra, for which she was awarded the renowned medal of the Philharmonic Society, occurred only hours after a solo recital. Another highlight of her early career was a performance for Abraham Lincoln at the White House, which vividly stayed in her memory: “The president and his family received us so informally and were so nice to me that I almost forgot to be cranky”—in spite of quite adverse circumstances: “the stool was unsuitable, the pedals were beyond reach, and when I had run my fingers over the keyboard, the action was too hard.”

In rapid succession Teresa Carreño conquered the concert halls of Havana, London and Paris. She travelled extensively, and her life at this point must have been full of exciting experiences and adventure: crossing the Atlantic Ocean. The family finally settled in Paris, an ideal environment for the aspiring pianist. Unable to enter the Conservatoire, she was able never-the-less to study with Georges Matthias, a Chopin student. She performed for both Gioachino Rossini and Franz Liszt; she met with eminent musicians such as Charles Gounod and Camille Saint-Saëns, and Anton Rubinstein himself insisted on giving her lessons, and even later on he was to hold her in high regard. Her repertoire by this point included works by Beethoven and Chopin; apart from that she mainly performed opera paraphrases, as was customary for a pianist of her time. She also presented her own compositions in many concerts, which appear very sophisticated considering her young age. A considerable number of her compositions date from this incredibly productive, incredibly busy period of her life, and were consequently published in the late 1860s and early 1870s, even before her twentieth birthday. It does not come as a surprise that these early compositions all require a highly skilled performer, given Teresa Carreño’s own considerable technical skills. The emotional depth of her compositions, however, manages to surprise time and again: It almost appears as if the life experiences of the following, turbulent years already resonate in these piano compositions; as if her music already foreshadows the tragic loss of her father, the premature death of her children and her failed marriages. 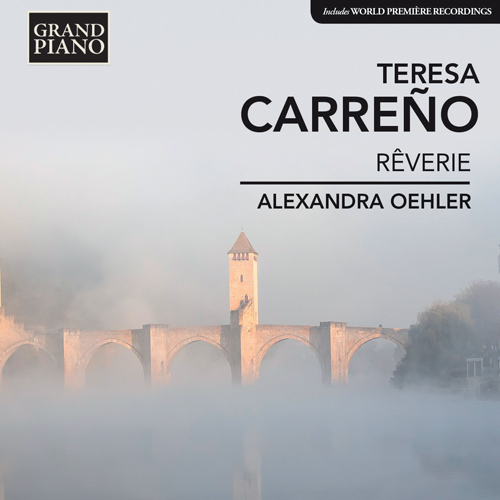