Composer Karl Fiorini (December 1, 1979) is internationally recognised as one of the new voices in classical music. Fiorini’s prolific career started at the age of 10, whose opus today totals more than 50 compositions, ranging from solo to chamber music to orchestral works. His repertoire includes two violin concertos, four piano concertos, a cantata and two symphonies as well as numerous works for orchestra both with and without voice. His style is marked with a sense of self-mockery and eclecticism, without lapsing into clichés.

Born in Malta, Karl Fiorini was early encouraged towards a career in classical music by his teachers. In his native country, he studied under composers Joseph Vella and the late Charles Camilleri and with Diana Burrell when attending the Guildhall School of Music and Drama and with Michael Zev Gordon at the Royal College of Music, London where he obtained his Doctorate. After his formal studies in the English capital, Fiorini moved to Paris to dedicate himself solely to composing. It was during this period that he penned his 2nd Violin Concerto, his two symphonies and various works for orchestra. ​

​Fiorini received numerous bursaries and international prizes, including the Garfield Weston Foundation, London in 2003 for his Second Piano Concerto, twice the Janatha Stubbs Fund for young artists 2004, 2008 and the Peter Moores Foundation, London, 2006, that permitted him to further his studies. Other awards include Boston’s Alea III Composition Prize for his Trio Lamina for Clarinet, Violin and Piano in 2004 and the Luxembourg Sinfonietta Prize for Composition in 2010 (third prize) for Nachtszenen for Violin and chamber ensemble. He also won the Tracey Cadwell Memorial Prize for vocal composition, London in 2005 with Aleamantes for Soprano and Piano, and received honourable mentions during the Schubert and Modern Times, Graz for his 1st Piano Trio and Uuno Klami Composition competition, Finland for In the midst of things for orchestra in 2005 and 2013 respectively. ​Fiorini was also the first Maltese composer to be invited for the prestigious Biennale di Venezia in 2015.

Fiorini’s early works were influenced by a type of Maltese nationalism and Mediterranean identity, still very prevalent in the music of his Maltese contemporaries. However by the time he finished the 1st Violin Concerto in 2007, and more so after he moved to France a year later, he had completely detached himself from this movement. During this time Fiorini began to develop a rhythmic and harmonic language, which crystallised in his latest works, such as Symphony No. 1 and No. 2 and de dioses y de perros for soprano, choir and orchestra (2015). Fiorini wrote several pieces based on literature, setting texts in the Maltese, French, German, English and Spanish languages. His most acclaimed work is Cadavre Exquis from 2012, where he set texts from three contemporary French, Spanish and Maltese poets, for three voices, orchestra and mixed media, commissioned by the Ensemble Télémaque, France as part of Marseille European Capital for Culture 2013. The European Contemporary Orchestra – ECO premiered this work at the Ballet National de Marseille, and later performed it in Mons and Flagey Theatre, Brussels, for Mons European Capital for Culture, 2015. Fiorini was again commissioned by the Ensemble Télémaque to write a work for small ensemble based on Entente Cordiale of the legendary French director Max Linder to mark the centenary celebrations of his work in 2013.

​Fiorini’s works are regularly programmed and to date his music has been heard in most European cities, China, Japan, Thailand, Russia, Siberia, Ukraine and the US. Important venues where his music was performed include the Berlin Konzerthaus and the Gewandhaus in Leipzig, the Flagey theatre, Brussels, Manoel Theatre, Malta, Kyoto City Hall, Japan, Cadogan Hall, London, Gulbenkian Centre, Lisbon and the Cathedral St Louis des Invalides, Paris. Between 2010 and 2012 he was composer-in-residence of the Orquestra do Norte, Portugal and in 2013/14 composer-in-residence of the Conservatoire de musique et danse of Avignon. In addition to his composer career Fiorini is also the founder and artistic director of the International Spring Orchestra Festival, an annual classical music festival taking place in Malta during the month of April. His CD of Violin Concertos has been released in 2014 by Divine Arts Records. 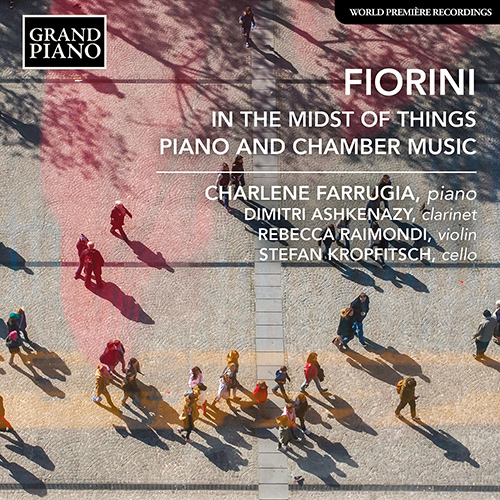 FIORINI, KARL
In the Midst of Things