Tigran Chukhajian (also known as Dikran Tchouhadjian or Çuhacıyan) held an important place in the history of Armenian music. He was the first Armenian musician to receive a professional European education; he was the first composer to find ways to bring together the musical cultures of the West and East; and was also the first to bring Eastern idioms to the genres of opera, symphony and chamber music.

As the Italian critic Riccardo Toren wrote, Chukhajian ‘founded a new school of music, merging Eastern national melodies with European techniques’. In this sense, the creative activity of Tigran Chukhajian was of great progressive significance for the development of musical art for the peoples of the Middle East where, in the second half of the 19th century, his works were widely distributed. However, Chukhajian’s life was not without tragedy. As the largest and most significant Armenian composer of the 19th century, he quickly achieved recognition and was referred to as the ‘Armenian Verdi’, among his contemporaries. But this success and recognition only briefly detracted from the difficulties of his life. Very soon, like many Armenian cultural figures who lived under the repressive conditions of Ottoman Turkey, Chukhajian was subjected to persecution. His songs were banned and insurmountable obstacles were put in place during preparations for the staging of his operas. In vain he fought for his art, but after the composer’s death, his music was mostly forgotten.

Tigran Chukhajian was born in 1837. His father was a watchmaker who served in Constantinople at the court of the Turkish Sultan Abdulmejid I. The musical abilities of the future composer were shown in early childhood. In his youth, Chukhajian attended theatrical performances, and this exposure to the theatre soon developed into a passion that would influence his future life path. From the scant information that has come down to us about Chukhajian’s early years (his biography is still far from clear and established), it is known that in 1859 he was appointed musical director of one of the first Armenian theatre companies in Constantinople, known as the Khasgyukha Theatre (the name of one of the districts of Constantinople). To complete his musical education, Chukhajian went to Italy in 1862. He stopped in Milan, which was famous not only for its musical traditions, including the Teatro alla Scala opera house, but also as the centre of Italian enlightenment and culture. Some biographers claim that Chukhajian had lessons with Verdi, others state that he studied at the Milan Conservatory, but it is difficult to guarantee the accuracy of this information. But no matter who Chukhajian’s teacher was, one thing is certain: he received an excellent musical education during his time in Italy. It is also clear that the formation of his compositional personality was greatly influenced by Verdi, who was then at the height of his fame.

Upon his return to Constantinople in 1864, Chukhajian immersed himself in the fight for the development of an Armenian national culture. He took an active role in the work of the Armenian Lyre music society, directing symphonic concerts. He also participated in the organisation of public concerts and lectures, and was head of one of the Armenian theatre companies in Constantinople. Chukhajian was one of the founders of the first Armenian musical theatre in Western Armenia, and at the same time became the founder of musical theatres in Turkey and throughout the Middle East. This was the atmosphere in which Chukhajian composed the first Armenian opera, Arshak II (1868).

Chukhajian also fostered the development of Armenian orchestral, instrumental and vocal arts. He was the first Armenian composer to compose a significative number of piano works, and some of them share a common thematic pattern with his opera Arshak II and his operettas Leblebici hor-hor agha (1875) and Zemire (1890). He was not an active solo performer, preferring instead the role of an accompanist, though a mention of one solo performance does exist in printed sources from the time. His reputation as a teacher of piano is more remarkable. He was regarded as an authoritative pedagogue in Western Armenian circles, and to be one of Chukhajian’s students was considered a great honour.

Moreover, it is sometimes possible to make distant parallels with other Romantic composers including Chopin and Liszt. Among such works we find Tarantelle, Une gavotte de plus, and Grande Valse fantastique (Chukhajian gave them French titles). The composer’s choices of genre are also distinctive in terms of the parallels with Romantic composers of the period and are a testament to Chukhajian’s understanding of Western European piano repertoire.

Chukhajian spent the last years of his life in Smyrna (now İzmir, Turkey) where he died in poverty in 1898. All of his manuscripts and even many of his personal items were sold in order to pay his debts. The music of Chukhajian is a triumph of the human spirit over the cruel realities the composer faced during his lifetime – a victory typical of

those documented all throughout the history of mankind. Neither his unbearable living conditions nor material deprivation could break his will. They say that he died with the score of Verdi’s Otello by his side – and we will never know what new creative ideas warmed the last hours of the life of this great Armenian artist. 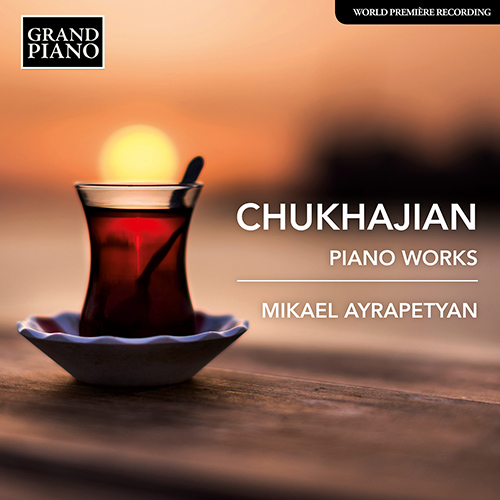