Louise Farrenc (originally named Jeanne-Louise Dumont) was born in Paris on 31 May 1804 into a highly artistic family. Both her father, Jacques-Edme Dumont, and her brother, Auguste Dumont, were highly successful sculptors, as their predecessors had also been. She became renowned throughout France and beyond as a pianist, teacher and composer, having studied piano initially with Cécile Soria (who had herself studied with Clementi), and later with Ignaz Moscheles and Johann Nepomuk Hummel.

At the age of 15, she began to take composition lessons, apparently unofficially, with the professor of composition at the Paris Conservatoire, Anton Reicha (1770–1836), but on her marriage to her fellow student, the flautist Aristide Farrenc, two years later, gave up her studies in order to travel round France giving concerts with him. Tiring of this, they subsequently founded a publishing house, Éditions Farrenc, which became one of the best-known music publishers in France. They produced 23 volumes of music for piano and harpsichord covering a vast chronological span, entitled Le Trésor des pianistes, and Farrenc also published an important book dealing with performing early music. She also resumed her studies with Reicha, and began touring as a virtuoso concert pianist. In 1842 she was appointed as professor of piano at the Paris Conservatoire, a position she held until 1873. She died in Paris on 15 September 1875.

While Farrenc’s work as a composer suffered undue neglect for a considerable time after her death, and while there is much still to be discovered about her life and music, in recent years her compositions have come once again to be recognised and performed. Initially, she wrote only for piano, but she subsequently expanded her range considerably to include chamber and orchestral music. Her Nonet, Op. 38, for wind and strings, brought her such recognition that she was able to demand that the Paris Conservatoire pay her the same as her male colleagues. She was twice awarded the Prix Chartier by the Académie des Beaux-Arts, in 1861 and 1869. 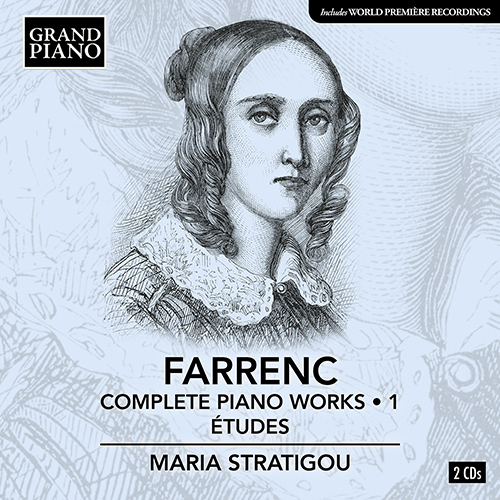