The brief but intense life of Czech composer and conductor Vítezslava Kaprálová (1915–1940) was set between the two world wars in the period of the First Czechoslovak Republic to whose modernist movement she belonged. Kaprálová’s creative development began in her hometown of Brno, stimulated first by the cultured environment of her own family and its circle of friends, among whom were some of the finest musicians and music scholars of the new republic. Her natural talent was recognized early and nurtured by her parents who both played an important role in Kaprálová’s early musical development. Her mother Vítezslava, born Uhlírová (1890–1973), was a qualified voice teacher; her father, Václav Kaprál (1889–1947), was a composer (a pupil of Leoš Janácek), teacher, pianist, choirmaster and music editor. The city’s conservatory, where young Kaprálová pursued a double major in composition and conducting from 1930–1935, provided a solid foundation for her education, which was further advanced by her studies under composer Vítezslav Novák and conductor Václav Talich at the Prague Conservatory from 1935–1937. Following her graduation from the conservatory’s Master School in 1937 and aided by a French government scholarship, Kaprálová moved to Paris, where she continued her studies in conducting with Charles Munch at the École normale de musique, while also taking private lessons in composition with Paris-based Czech composer Bohuslav Martinu. Martinu’s often cited influence on Kaprálová’s musical development is overestimated, however, for the music of Igor Stravinsky and her father in particular exerted as strong an influence on the young composer. There is no doubt that when Kaprálová died in 1940, possibly from typhoid fever, just two months after marrying Alphonse Mucha’s son, the world of classical music was robbed of a burgeoning talent and a highly individual voice.

Like her composer father, Kaprálová was drawn to piano as her natural instrument, and piano compositions are well represented in her relatively large creative output that includes about fifty compositions. Piano also played a crucial role in her music as a compositional tool with which she experimented in both smaller and larger forms. It is therefore not surprising that her most original and sophisticated works are for this instrument: from her Sonata appassionata and Piano Concerto in D Minor to April Preludes and Variations sur le carillon de l’église St.-Etienne-du-Mont (and the Martinu–influenced, neoclassical Partita in which piano also plays an important percussive role). Piano compositions arguably represent the best of Kaprálová’s music which abounds in fresh and bold ideas, humour, passion and tenderness, and is imbued with youthful energy. 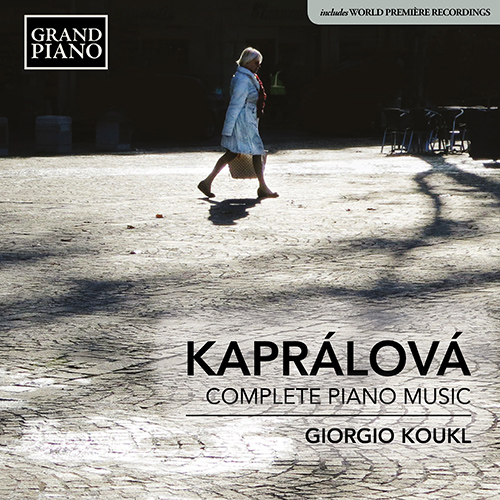