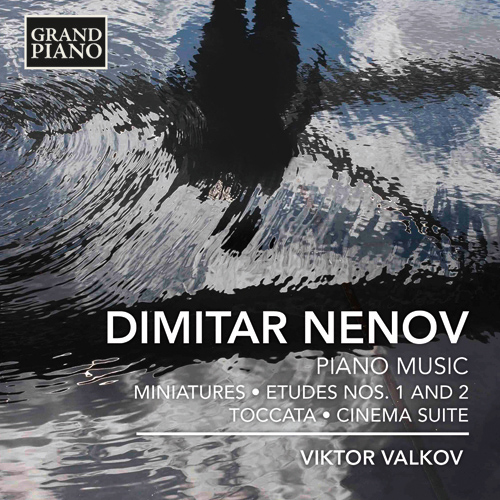 “I first came in contact with the music of Dimitar Nenov more than ten years ago when I performed his enormous piano concerto. I have been fascinated with his music ever since, and now I am thrilled to present this most imaginative, poetic, and exciting music. If there is a Bulgarian composer from the first half of the 20th century that deserves attention, this is the one!” — Viktor Valkov

Dimitar Nenov was a leading figure of early 20th-century Bulgarian classical music. The entire range of his solo piano works is covered on this recording, from the austere and dissonant Cinema Suite to the romantic Etudes and exquisite Theme and Variations in F sharp major. The highly charged Toccata is Nenov’s most popular work, while Fairy Tale and Dance, his last work for piano, is the most distilled example of his art. Winner of the 2012 New Orleans International Piano Competition, Bulgarian pianist Viktor Valkov has performed as a soloist, chamber musician and recitalist across Europe, in the United States and in Japan. Valkov studied with Jerome Lowenthal and Matti Raekallio at The Juilliard School and is currently pursuing a Doctoral Degree at Rice University, Houston. A proponent of the more obscure piano and chamber music repertoire by composers such as Alkan, Dohnányi, Busoni and Dimitar Nenov, Valkov has recorded Nikolay Roslavets’ complete works for cello and piano with Lachezar Kostov for Naxos. Dimitar Nenov was undoubtedly one of the leading figures in Bulgarian classical music from the first half of the twentieth century. A brilliant pianist, composer, and architect, he was a crucial figure for the generation of composers that came after him. It was this group of composers that formed the Bulgarian avant-garde of the 1950s and 1960s.

“Viktor Valkov plays with technical accomplishment, aplomb and a real sense of attunement to this music of his homeland.” – Fanfare

“Every piece is well crafted, and played with sensitivity by pianists Andrey Kasparov and Oksana Lutsyshyn” — Fanfare