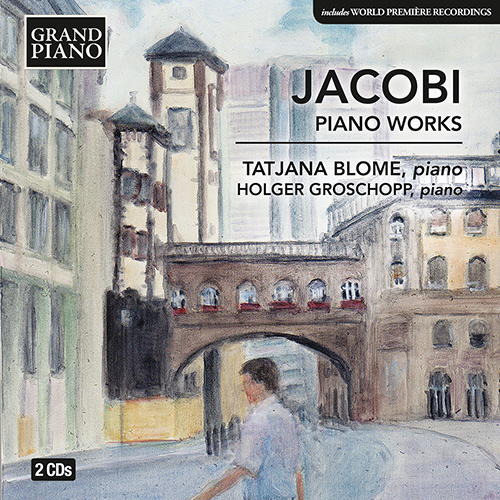 “Wolfgang Jacobi's harmonious language is ambiguous, ranging from a smirking expressionist harmony (that can be interpreted in many ways) to a greatly reduced melodic melody, where everything unnecessary is left out. His sprawling motor-like eccentricity always evolves from a clear sense of the form of the movement. Jacobi uses traditional forms of models in all the works and fills them with unexpected and surprising ideas. His short-form dances, the more complex sonata forms, and also the music for two pianos leave the listener even more curious about a composer who is a great discovery for me.” — Tatjana Blome

Wolfgang Jacobi is known to saxophone and accordion players, but he is otherwise largely forgotten and his wider output is still being rediscovered today. He was declared a ‘degenerate’ artist in 1930s Germany but found inspiration in Italy, alluding to Baroque styles in his Sonatas as well as in earlier works that also invoke the spirit of Reger and Grieg. Post-war freedom is reflected in the joyously neo-Classical Sonatine and charming Miniaturen, while the substantial Musik für zwei Klaviere explores the symbolism of one of J.S. Bach’s favourite chorale melodies ‘Durch Adams Fall.’ Holger Groschopp’s solo career has taken him to most European countries, the Middle and Far East and North and Central Americas. He has performed as soloist at major European festivals (including Berlin, Salzburg and Montepulciano) and played chamber music with many prominent musicians. He has had a close collaboration with Claudio Abbado, Sir Simon Rattle, the Berlin Philharmonic, the DSO Berlin and the Mahler Chamber Orchestra. His six recordings released on the Capriccio label with transcriptions by Ferruccio Busoni were given the highest acclaim by a range of international critics, including highest recommendation in the BBC Music Magazine and Fanfare. Karl Theodor Franz Wolfgang Jacobi was born in 1894 in Bergen on the island of Rügen, off Germany’s Baltic coast. Although music fascinated him from an early age, it was only in 1917 that he staked his future on becoming a professional composer.

“Tatiana Blome is a superb champion for this surprisingly powerful music. She plays with iron-clad command, lovely tonal coloring, and a strong sense for the drama of the works at hand.” – Fanfare

“This is music that should be heard and played, music that was falsely considered to be “outlawed”, which due to its very own style represents a part of German music history. It is good that Tatjana Blome devotes herself so profoundly to this music.” – Piano News