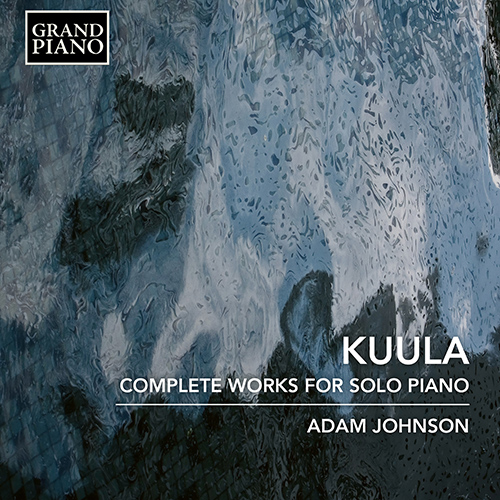 “I was introduced to the music of Toivo Kuula in 2016 when I was sent the new edition of Nocturne (or Jouluyö). I was immediately struck by the vast scope of the writing and the space. The more I was sent, the more I was then intrigued by the variety, harmony and imagination of such pieces as Satukuvia, Op. 19, and the light-hearted Schottis and Tanssi-improvisaatio. I have performed full recitals of Toivo Kuula’s works in London venues (including St Martin-in-the-Fields in Trafalgar Square), to delighted audiences, and I have discovered that the reaction to his music is that it is of great beauty and fascination, and stimulates a desire to hear more of Kuula’s work.” — Adam Johnson

Finnish composer and conductor Toivo Kuula was a student of Sibelius, and pieces such as the majestic Juhlamarssi (‘Festive March’) share the great master’s national flavour while the descriptive folktales of Satukuvia create their own beautifully romantic atmosphere. Kuula’s piano music is notable for its vast array of colour and variety of style, from the melancholy Surumarssi (‘Funeral March’) (from Six Pieces, Op. 26) to the lighthearted Schottis (‘Scottish Dance’), while countless Finnish couples have been married to the accompaniment of Kuula’s Häämarssi (‘Wedding March’). Multi prize-winning pianist, Adam Johnson, was a scholar and Junior Fellow at the Royal Northern College of Music in Manchester (RNCM). He has performed under the batons of Kent Nagano, Martyn Brabbins and George Hurst, and made his concerto debut aged 15 playing Mozart’s Piano Concerto No. 15 in Pavlovsk Palace, St Petersburg, conducting from the piano. Unique among the outstanding artists of his generation, Johnson is as equally at home conducting opera as he is fulfilling the role of soloist in concerto repertoire, playing chamber music, or directing his own large-scale compositions. He has given recitals in Istanbul, New York, Northern Spain, Norway, and Rio de Janeiro, as well as undertaking a demanding schedule in the UK. In 2008, he completed a master’s degree in conducting at the RNCM under the direction of Sir Mark Elder, and was awarded the Ricordi Operatic Conducting Prize in 2007. Johnson is currently the artistic director and principal conductor of the Northern Lights Symphony Orchestra. In 2011, he was elected a Freeman of the Worshipful Company of Musicians, and more recently was rewarded as a Fellow of the Royal Society of Musicians. Adam Johnson made his Wigmore Hall debut in October 2017. It is in particular for his songs and vocal writing that he is remembered. Kuula died at the early age of 35, and was a full-blooded national romantic. His music breathes the spirit of his own country, Ostrobothnia. Kuula left 24 solo songs for voice and piano. Typical features include a strong melodic flow and Slavic pathos, and many songs are in a minor key and a melancholy mood. It would be too simple, however, to claim that Kuula was an ardent hothead whose songs embody the rougher traditions of Ostrobothnia. Alongside local passions, his songs also carry a quite different vein of refined and nuanced sensuality, as in Sinipiika (Blue Maiden) or Jkukkia (Ice Flowers), which comes close to impressionism.