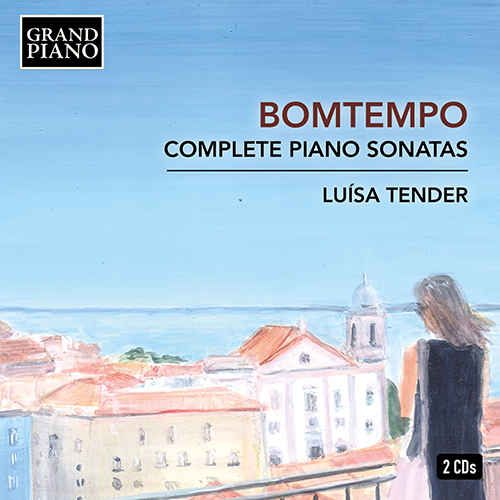 “I am very passionate about early nineteenth-century Portuguese history. This was the time when Portugal was invaded by Napoleon’s armies, when the king and his court fled to Brazil, a long time of war. This was also the time when Lisbon-born João Domingos Bomtempo composed most of his piano works. Bomtempo’s piano sonatas are a treasure of diversity. I love joking about the composer’s name: the literal translation meaning "good weather", much appreciated by those who visit our (mine and Bomtempo’s…) native country.” — Luísa Tender

Piano sonatas are pre-eminent in Bomtempo’s oeuvre. They show a diverse range of influences from Haydn, Mozart and Beethoven but contain many original features, not least incendiary scalar passages and dramatic hand crossings. Full of lyricism, counterpoint and often exceptional virtuosity, these features reach a peak in the monumental Piano Sonata, Op. 20, one of his most demanding piano compositions. Luísa Tender regularly performs as a soloist and chamber musician, and her repertoire ranges from the Baroque to the contemporary. Her first release, Bach and Forward, recorded at the RCM studios, was reviewed as a top release of the month in Classical Music magazine in 2009. Tender’s second recording, Página Esquecida, was internationally praised, garnering critical acclaim in publications such as Fanfare magazine, Strings magazine, and das Orchester, among others. João Domingos studied music at the Seminário da Patriarcal and was admitted to the Irmandade de Santa Cecília at the age of 14. Later, he became a musician of the Orquestra da Real Câmara. In 1801 he went to Paris where he pursued a career as a pianist and composer. At the time of the first French invasion of Portugal, Bomtempo moved to London. Between 1815 and 1821, he occasionally returned to Portugal. His liberal ideas became a problem during the absolutist reign of Dom Miguel (1802–1866) and the Portuguese Liberal Wars (1828–34). After many difficulties, including living as a refugee in the Russian consulate in Lisbon, Bomtempo’s circumstances improved, and he was able to continue his activities, with a particular focus on pedagogy. One of his students was the Portuguese princess royal, later Queen Maria II (1819–1853). He founded the Sociedade Philarmónica—a concert society with the main aim of organising orchestral concerts—and became the first director of the Lisbon Conservatory upon its creation. One of his most relevant contributions to the field of music pedagogy was a volume entitled Elementos de Música e Método de Tocar Forte Piano, op. 19. As a composer, he left a variety of works in different musical genres with the exception of opera, of which only a fragment is known.

“I was struck by Luísa Tender’s fresh and clear eyed approach to the music, avoiding over indulgence in the delicious opening theme, moving the music on with discreet virtuosity.” – ILAMS – The Iberian and Latin American Music Society

“Matteo Napoli plays with sensitivity and aplomb. His interpretations are tasteful and elegant rather than overtly effusive. He is particularly adept at capturing the humor in much of Cramer’s writing.” — Fanfare

“The playing is exquisite and sensitive.” — American Record Guide