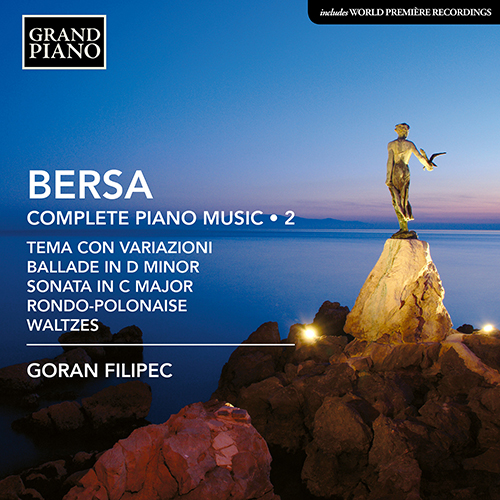 “Although Bersa was the most influential Croatian composer at the turn from the 19th to the 20th century, his music stayed rather unknown to international audiences. The beauty of his melodic lines and the delicacy of the way he conceives musical textures are an astonishing discovery. Occasionally evoking styles of Beethoven, Brahms or Liszt, Bersa never abandons the idioms of music traditions of his home Mediterranean, which seems to be the area of his utmost expression.” — Goran Filipec

As with the first volume in this series (GP767), Blagoje Bersa’s piano works are organised according to their character and tonality rather than chronologically. They include elements of transcription drawing on Mozart and Beethoven but also characterful barcarolles that evoke Italian music, a taut and witty Bizarre Serenade, a simple but affecting Mélancolie, and an invitation to a Viennese ballroom in the Valzer, Op. 3. As a composer of symphonic music, operas and songs, as well as chamber and piano works, Blagoje Bersa (1873–1934) was undoubtedly one of the central figures of Croatian musical life at the turn of the 20th century.