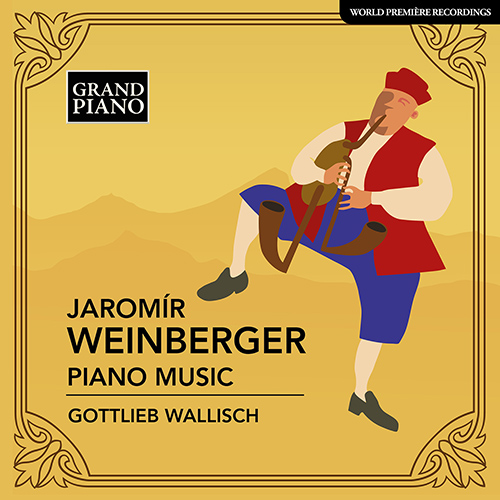 “Prague-born composer Jaromír Weinberger, a prodigy of near-Mozartian proportions, started the piano at the age of five and was composing by his tenth year. A student of Vítĕzslav Novák and Max Reger, he is the author of more than 100 works in all genres – the most famous being his 1927 hit⁠-⁠opera Švanda Dudák (‘Schwanda the Bagpiper’). While some of his orchestral masterpieces have been receiving the right attention, curiously his unjustly neglected piano music appears here in a series of world première recordings, which give justice to his great compositional variety, depth and contrapuntal mastery.” — Gottlieb Wallisch

The international success of Weinberger’s opera Schwanda the Bagpiper in 1927 has obscured a sequence of piano works written when the composer was still in his teens. The Second and Third Piano Sonatas form a commanding pair, both written in 1915 – the former autobiographical, playful and dark – the latter neo-Classical with Francophile elements. Elsewhere one can admire his use of 16th-century dance forms, his melodic gifts in the Valses Nobles, and his technical command of preludes and fugues in Gravures. The three arrangements from Schwanda show his imperishable use of Bohemian dance forms. Born in Vienna, Gottlieb Wallisch first appeared on the concert platform when he was seven years old, and at the age of twelve made his debut in the Golden Hall of the Vienna Musikverein. A concert directed by Yehudi Menuhin in 1996 launched Wallisch’s international career: accompanied by the Sinfonia Varsovia, the seventeen-year-old pianist performed Beethoven’s ‘Emperor’ Concerto. Since then Wallisch has received invitations to the world’s most prestigious concert halls and festivals including Carnegie Hall in New York, Wigmore Hall in London, the Cologne Philharmonie, the Tonhalle Zurich, the NCPA in Beijing, the Ruhr Piano Festival, the Beethovenfest in Bonn, the Festivals of Lucerne and Salzburg, December Nights in Moscow, and the Singapore Arts Festival. Conductors with whom he has performed as a soloist include Giuseppe Sinopoli, Sir Neville Marriner, Dennis Russell Davies, Kirill Petrenko, Louis Langrée, Lawrence Foster, Christopher Hogwood, Martin Haselböck and Bruno Weil. Orchestras he has performed with include the Vienna Philharmonic and Vienna Symphony Orchestras, the Royal Liverpool Philharmonic, the Gustav Mahler Youth Orchestra, the Frankfurt Radio Symphony, the Festival Strings Lucerne, the Franz Liszt Chamber Orchestra in Budapest, the Musica Angelica Baroque Orchestra in Los Angeles, and the Stuttgart Chamber Orchestra. “If you like to hear new things and especially of the piano variety, give it a go.” – Classical Music Daily

“This new recording is an utterly delightful collection of Austrian and Czech foxtrots and other dance music, performed with panache and great affection.” — American Record Guide

“This is intoxicating fun: a disc of foxtrots from post-World War I Germany. Wallisch’s playing combines virtuosity with the lightest of touches.” — The Arts Desk