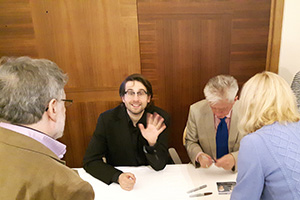 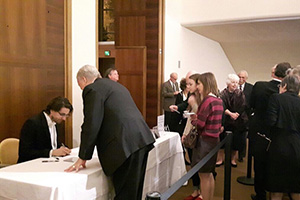 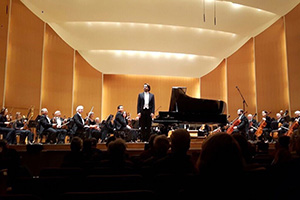 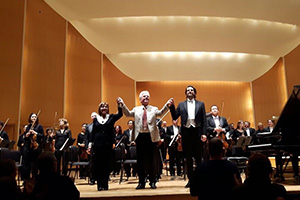 Over the course of 12 hours, beginning in the evening of 1 October, NICOLAS HORVATH presented the complete piano works of Philip Glass in chronological order at one of his famous epic recital marathons at the Philharmonie de Paris. This was a touching tribute from one pianist to another, conveying Horvath’s deep regard for the works of one of the most influential musicians of the 20th and 21st centuries.

The whole recital was capped by an hour of standing ovation, and nine encores from Nicolas, which includes works by Glass (Etudes, etc.), Satie (Gnossienne 1& 3), Jaan Rääts (Radio 4), and Scriabin (Vers la Flamme).

The fifth volume in our series of Philip Glass' piano works on Grand Piano was released this month (GP745). The programme includes Mad Rush, the revised version of Metamorphosis II, 600 Lines, and an arrangement of the Simon and Garfunkel hit The Sound of Silence.

Pianist Josu De Solaun, winner of the 2014 Enescu International Piano Competition who is releasing a three-volume cycle of George Enescu's complete works for solo piano on Grand Piano, was recently featured on the cover of the Jul-Aug 2016 issue of Spanish music magazine Ritmo. In addition to an in-depth interview with Josu, the magazine gave the first volume of the Enescu cycle four stars, describing the recording as “a deep and hard endeavour, not only playing them in concerts but also doing a deep and strong research of the composer’s manuscripts. In addition to the great work of the sound engineer, Jorge Luis García Bastidas, we find the fine Shigeru Kawai instrument, and the wonderful Palau de la Música de Valencia concert hall. I assure you that the results of this album are amazing.”

Josu will be having a solo recital on September 24 at the Romanian Athenaeum in Bucharest, during the XXII George Enescu Festival.
For tickets: concurs.festivalenescu.ro/events/2016-competition/recital-josu-de-solaun/