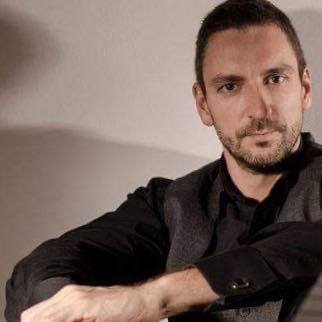 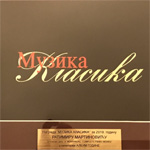 We are very proud to see Grand Piano artist Luísa Tender on the cover of Ritmo, the leading Spanish classical music magazine, and a four-page feature about her recording of Portuguese composer João Domingos Bomtempo’s complete sonatas. Journalist Gonzalo Pérez Chamorro caught up with Luisa after her arrival in Madrid from Lisbon to ask her about these works and their historical connotations, as well as her approach to music and pedagogical activities. If you read Spanish—don’t miss the article or the album review.

Everyone at Grand Piano was saddened to learn of the passing of conductor Kerry Stratton, who died aged 66 of complications from ALS on Tuesday, 27 August 2019.

In the course of his international career, Kerry conducted orchestras in 35 countries throughout Europe, North America and Asia. Having earned a degree in conducting from McGill University, he later completed graduate studies at the Vienna Conservatory (under Sir Charles Mackerras), the Academia Chigiana in Siena, Italy, and L’École Pierre Monteux in the US (with Charles Bruck).

For his services to Czech and Slovak culture, Kerry received the 2000 Masaryk Award and was decorated by the Czech Government in 2007 at Prague’s Cernin Palace with the Gratis Agit Award. Others similarly honoured included former US Secretary of State, Madeline Albright and filmmaker, Miloš Forman. Kerry was a wonderfully positive and enthusiastic musician—conductor, music director, radio personality—and his joy in music lives on in his recordings. We are proud that two Grand Piano releases are among them: the first, of Joachim Raff’s works for piano and orchestra [GP771] with Tra Nguyen; the second, a recording of Edvard Grieg and Helge Evju’s Piano Concertos with Carl Petersson [GP689]. Kerry can be heard talking about this latter recording [c. 01:50—03:50] in the following video link: https://youtu.be/8X6txnH4y5k?t=131 The 2019 OPUS Klassik nominees were announced last week and Grand Piano artist Inga Fiola was nominated in two categories: Best Instrumentalist (Piano) and Best Instrumental Solo Performance. Both nominations were for her second album of Mikhail Glinka’s piano music. The series thus far has received much critical acclaim. The first volume received four stars from International Piano, which described Inga Fiola as ‘the perfect guide to Glinka’s piano music,’ while The WholeNote praised volume two, saying, ‘Fiolia is a natural performer for this genre. Something about the dance form, regardless of its origin or style, seems to draw from her a fluid response that sways with the music.’

Of her OPUS Klassik nominations, Inga had this to say: ‘I’m very happy to have been nominated. I think the music of Glinka deserves the recognition. For me, he was a great music figure in history, with his own unique style, and his piano music is an integral part of my repertoire. I believe Glinka’s time has finally come.’

Congratulations, Inga! We’re all wishing you the very best! 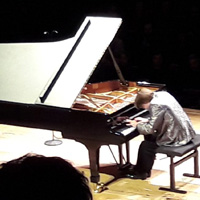 Philip Glass embarked on his Études for piano in 1991, a project that continued over the years to reach a total of twenty works in 2012. A gala performance of the resulting Intégrale des Études pour piano was held at the Philharmonie de Paris on 17 and 18 May 2019, during which Philip Glass himself performed the first two studies before yielding the piano stool to nine other distinguished pianists to complete the performance: Timo Andres, Anton Batagov, Célimène Daudet, Aaron Diehl, Thomas Enhco, Nicolas Horvath, Katia Labèque, Marielle Labèque and Maki Namekawa. 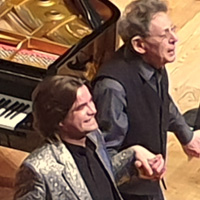 Receiving applause alongside the composer.

Followers of the Grand Piano label will in particular recognise from that list the name of Nicolas Horvath. His 5-volume Glassworlds for the label comprises all of Glass’ piano works, an undertaking outdone in stamina only by his live, 12-hour recital of the complete works in 2016, also held at the Philharmonie de Paris, which attracted a cumulative audience of some 14,000 people. 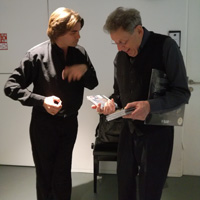 Presenting the composer with the six Grand Piano recordings of his works.

Performing alongside the composer himself at this latest event proved a memorable occasion for Horvath:

“I presented the composer with copies of the 5 Glassworlds volumes together with Glass Essentials, the selection I recorded on LP. He was amazed by the totality of what we had recorded, including some pieces he couldn’t believe we had turned up. He also kindly autographed all my scores and books of his works.”