On Sunday April 9th 2017, as part of Estonian Music Days, the oldest and biggest contemporary classical music festival in Estonia (www.eestimuusikapaevad.ee/en/), the French pianist Nicolas Horvath gave a solo concert dedicated to the renowned Estonian composer Jaan Rääts, who is celebrating his 85th birthday this year. In addition to various works by Rääts, including Sonatas Nos. 9 and 10, Radio 4 and the world première of Prelude (2017), Horvath performed pieces dedicated to the composer, written by other composers who studied with Rääts: Avi Benjamin, Raimo Kangro, Tõnis Kaumann, Mihkel Kerem, Kerri Kotta, Tõnu Kõrvits, Vsevolod Pozdejev, Timo Steiner and Erkki-Sven Tüür. The concert, organised in collaboration with the French Institute in Estonia, took place in Radio Studio 1 of Estonian Public Broadcasting. After the concert Naxos Head of Production Peter Bromley, on behalf of Grand Piano, and Nicolas Horvath, presented Mr Rääts with a copy of the pianist’s newly released Grand Piano recording of Volume 1 of the 10 Piano Sonatas [GP765: Nos. 1–4, 9 and 10].

New Zealand fortepianist and Grand Piano recording artist Dr Kemp English has just returned from a residency at the Western Australian Academy of Performing Arts in Perth.  He gave a concert on their new fortepiano (built by renowned instrument maker Paul McNulty) and presented workshops and papers devoted to the music of Leopold Koželuch. Kemp’s world premiere recordings of the complete cycle of keyboard sonatas by Leopold Koželuch are being released on the Grand Piano label, with Volume 9 (of 12) scheduled for release shortly.

The series has garnered excellent reviews from around the world. The UK’s Early Music magazine commented: “This is entertaining music, especially when played with English’s panache and vitality”. MusicWeb International and Klassik.com described Kemp’s performances as both  “superlative” and “awesome”. Volume 5 received a five-star review from BBC Music Magazine 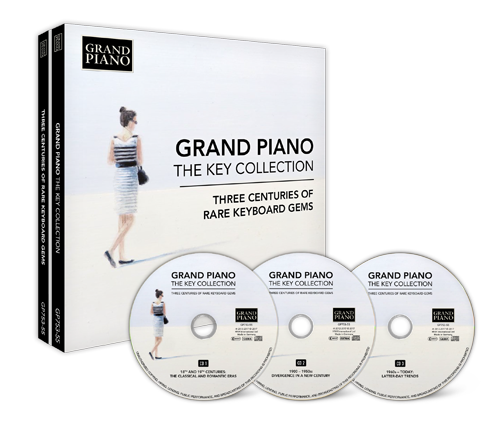 Five years ago, the Grand Piano label was established to explore undiscovered and rare gems of the piano repertoire that might otherwise remain unknown and unrecorded. The label’s catalogue contains an extraordinary number of world première recordings, performed by virtuoso authorities in their chosen field. We invite you to celebrate our fifth anniversary with the new GRAND PIANO: THE KEY COLLECTION which will take you through three centuries of keyboard treasures. Organised chronologically according to the year the work was published, each album in this 3-CD set is dedicated to a particular period of piano music, from the 18th and 19th centuries, all the way to the present-day.

In the anniversary month we now also launch this brand new website, which we hope will serve as a guide for adventurous piano music lovers to discover new piano repertoire. However, like any journey, there may be some wrong turns and detours along the way, so please bear with us if you encounter any glitches on the site, and do let us know so that we can make improvements for the best possible experience!  To help you ‘discover’, a powerful search engine will be added to the website very soon.

We hope you enjoy visiting our new website and finding out why Grand Piano Records is ‘a treasure island of piano music’ (Spiegel Online).

NICHOLAS WALKER’s complete Balakirev piano works cycle has been selected as Radio 3’s CD of the Week! Nicholas, who has been described by the BBC Music Magazine as possessing “the flair of a full-scale virtuoso and a sparkling intelligence”, has released three volumes in the cycle thus far to critical acclaim, with American Record Guide unequivocally declaring that there is little doubt that the series will become “the reference set for Balakirev.”

Participants at the Naxos Germany’s annual retailer conference in Munich were in for a surprising treat when Georgian-German pianist INGA FIOLIA appeared at the conference to perform pieces from her debut recording of Mikhail Glinka’s piano works for Grand Piano.  The Cologne-based Fiolia was in Munich to give a release concert at the Steinway Hall.

Inga Fiolia has made a name for herself as a young, exciting and gifted performer, particularly in Germany where she has won several international piano competitions. She has appeared twice on the ARTE TV show “Stars of Tomorrow”, hosted by world-renowned tenor and ECHO Klassik prizewinner Rolando Villazon.

Fiolia’s debut recording, released in February, has received extensive interest from the German music press with two major publications – Crescendo and Piano News – issuing major articles, interviewing the young pianist, and Crescendo even featuring her on the cover.  Glinka is one of her favourite composers, which is noticeable in her inspired performance of the delightful Variations.

Two-time GRAMMY Award-winning jazz pianist, arranger and composer Alan Broadbent has this to say about the recording: “We seem to be living in a musical world full of pianists who amaze us with displays of technique that even Liszt would be astonished by, I’m sure. But music, to me, is more precious and lasting when an artist opens the door to our hearts and communicates feelings expressed in the notes that a more superficial performance won’t reveal. Such an artist is Inga Fiolia. When I hear her play I am transported across generations into the essence of the music. This collection of Glinka pieces is a delightful introduction not only to his music, but to the transparency and beauty of Ms. Fiolia’s superb playing.”