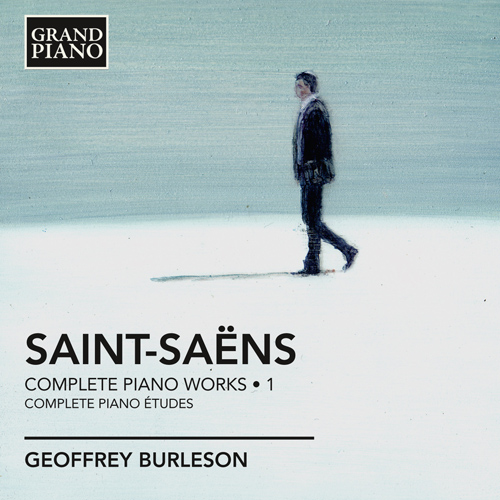 “Saint-Saëns' music has captivated me ever since I learned his Allegro Appassionato as a teenager. The breadth of his ingenious piano works never fails to amaze me, as it simultaneously encompasses classical, romantic and modern sensibilities so compellingly. Saint-Saëns was also a groundbreaking innovator in the realm of piano technique, creating formidable but also invaluable challenges for the performer. It has been rewarding on all levels to immerse myself in the works of one of the greatest piano composers for this project.” — Geoffrey Burleson

A seminal figure of French Romantic music, Camille Saint-Saëns was also a great keyboard prodigy. The Études, Op. 52 unite exuberant virtuosity with shimmering delicacy, while the Six Études, Op. 111 pay homage to Chopin and Bach as well as anticipating Ravel’s impressionism. The neo-Baroque Op. 135, for left hand alone, is modelled on Couperin and Rameau. This title is the first volume of a series that brings together everything from Saint-Saëns’ spellbinding three sets of études to first recordings of transcriptions and other works. “‘Les cloches de Las Palmas’ is surprisingly haunting and evocative…and the Toccata from the Fifth Piano Concerto provides a truly dazzling finish to the set.” – Gramophone

“Only a brilliant piano technician can perform these 18 knuckle-busters, and Burleson is such a pianist…his ability and stamina to get through these and make music out of them is nothing short of amazing. ” – American Record Guide

“The influences on the 18 pieces are quite different, and Burleson does well in showcasing the differentiation. These pieces…explore piano techniques skillfully while offering listeners more-substantial involvement than études usually do.” – Infodad.com

“Hats off! Anyone who is seriously interested in piano music should check out Grand Piano for an extended test drive in their home CD player.” – The Listener

“A virtuoso par excellence, easily handling the numerous difficulties one finds in this music.” — Fanfare