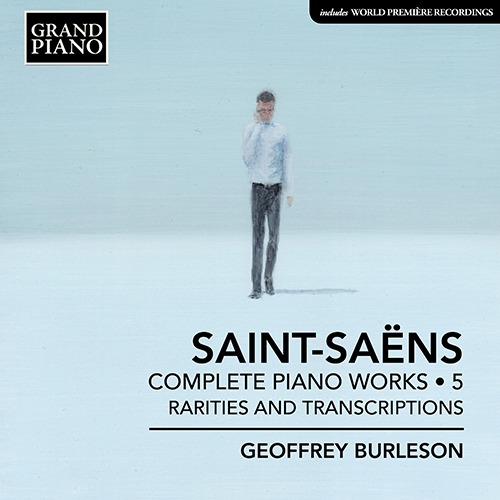 “Volume 5 of my complete survey of Saint-Saëns’ solo piano works features world première recordings of unpublished pieces I found in the Bibliothèque Nationale in 2013. Why they were never published is a mystery to me, as they are all striking, imaginative and very effective. Saint-Saëns was a master of the fantasy-transcription genre, equal to Liszt, and the extremely inventive and virtuosic fantasies on this album, on themes of Wagner, Bizet, Massenet and others, are absolutely exhilarating to perform.” — Geoffrey Burleson

The eight world premiere recordings included in this programme are played from a treasure trove of unpublished manuscripts obtained by Geoffrey Burleson from the Bibliothèque national de France, each of them filled with strong and imaginative ideas. Further virtuosic rarities by Saint-Saëns include a solo transcription of his exotic Africa for piano and orchestra, and fantasies on works by Beethoven, Gounod, Liszt, Bizet and others. “A virtuoso par excellence, easily handling the numerous difficulties one finds in this music.” – Fanfare

“This is an absolute must for anyone interested in Saint-Saëns or romantic virtuosic piano music. ” – American Record Guide

“This is a marvellous recording… Once again, the pianist Geoffrey Burleson has made a super job of these obscure and interesting works.” – MusicWeb International

“‘Les cloches de Las Palmas’ is surprisingly haunting and evocative…and the Toccata from the Fifth Piano Concerto provides a truly dazzling finish to the set.” — Gramophone