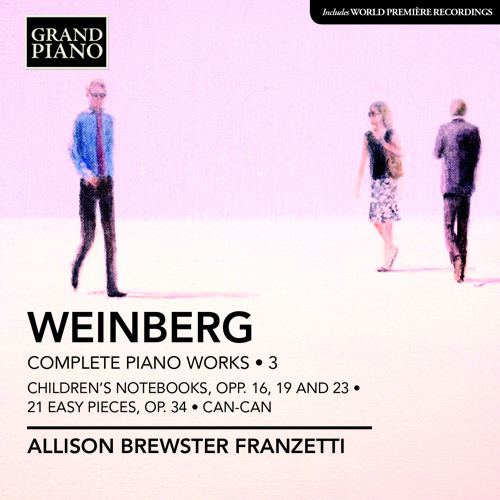 “Of the works Weinberg wrote as an up-and-coming composer during the terrorizing last years of Stalin’s reign, Children’s Notebooks are a heartbreakingly beautiful and varied set of works, whose name does not reflect the level of difficulty inherent to this collection. 21 Easy Pieces, Op. 34, is a wonderfully imaginative and varied set that is perfect for young students. Can-Can is a short, entertaining dance composed for Olga Rakhalskaya, who became Weinberg’s second wife and mother of their daughter, Anna.” — Allison Brewster Franzetti

Whilst Weinberg was establishing his reputation in Moscow with a series of string quartets and other chamber music, he also wrote a sequence of piano music called Children’s Notebooks: twenty-three charming miniatures written to meet the strong demand for music for children in the Soviet Union. These sets, however, were criticised for so-called inappropriate sophistication. Possibly Weinberg’s aim was simply to compose good piano music that might be listened to by children but also played by older students, along the lines of Schumann’s Album for the Young and Scenes from Childhood. The 21 Easy Pieces for Piano are mood pictures, and harmonically a microcosm of Weinberg’s style. Although less technically demanding than the Notebooks, they are certainly not aimed at beginners. The Can-Can is a little jeu d’esprit dedicated to Olga Reznitskaya, who was later to become Weinberg’s second wife.

This recording was made on a modern instrument: Fazioli 308 Concert Grand “It was a wonderful journey, and well worth taking with Allison Brewster Franzetti as our guide.” – Fanfare

“Her two previous Weinberg volumes were very well received, and Brewster Franzetti again shows herself to be on multi-faceted, persuasive form.” – MusicWeb International