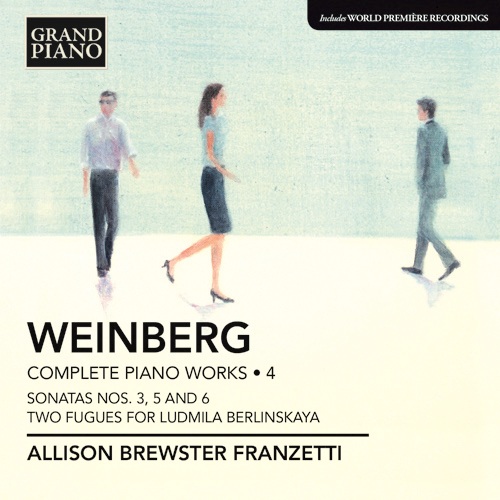 “The works on this CD represent Weinberg at his finest, as evidenced by his masterful fugues in Sonata No. 3, Sonata No. 6 and the Two Fugues composed for Lyudmila Berlinskaya, the magnificent passacaglia of Sonata No. 5, and his majestically beautiful Adagio movements. This CD is the completion of a journey through a musical landscape that is rich with inspiration, hope, wisdom, and love.” — Allison Brewster Franzetti

Weinberg’s fraught early life included two dramatic escapes from the Nazis, as he made his way from his native Poland to the Soviet Union. His eventual arrival in Moscow in August 1943 saw a period of relative stability in his personal life and an extraordinary burst of creative vitality. Sonata No. 3, composed in the space of a week at the end of January 1946, represents a conspicuous advance on its predecessors. The deeply expressive, technically challenging and superbly varied Nos. 5 (1956) and 6 (1960) are the last of the numbered piano sonatas.

This recording was made on a modern instrument: Fazioli 308 Concert Grand “It was a wonderful journey, and well worth taking with Allison Brewster Franzetti as our guide.” – Fanfare

“Allison Franzetti seems the perfect advocate for Weinberg’s music, not only because she has the technical chops to play this often obsessive, astringent, steely music, but because she gets inside the music as well, sympathizing with Weinberg’s often troubling world view in a way that brings it home to a listener” – Audiophile Audition

“Allison Brewster Franzetti is superb in this repertoire with thoughtful interpretations and a wonderfully fluid sound. ” – MusicWeb International

“They are beautiful works, played with feeling and sensitivity by Ms. Franzetti. ” – Gapplegate Classical-Modern Music Review