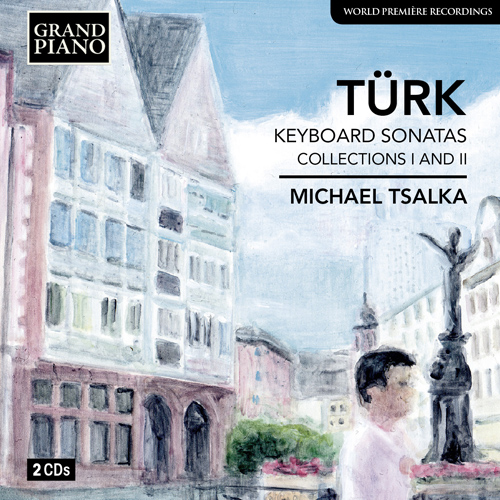 “This recording represents the culmination of my research and promotion of the 48 keyboard sonatas of Daniel Gottlob Türk (1750-1813). Until now, these sonatas have remained as buried treasure, virtually unknown to the musical community at large. I strongly believe that pianists, early keyboard performers, teachers, and musicologists will discover untapped riches in these expressive and elegant works. The sonatas' correlation to central stylistic and aesthetic concepts discussed in the composer's own influential musical treatise Klavierschule (1789) make their reincorporation into the standard repertoire desirable and perhaps even crucial.” — Michael Tsalka

Collections I and II

Daniel Gottlob Türk is best known for his influential pedagogical treatise Klavierschule (1789). His 48 inventive and varied keyboard sonatas were influenced by Sonatas of other North German composers such as C. P. E. Bach and J. W. Hässler. The five historical keyboards employed in this recording reflect the diversity of the instruments available in Türk’s day. The twelve sonatas encompassed in his first and second collections show how the composer’s sensitive, at times dramatic, oratorical style relates beautifully to the nuanced expressive capabilities of these instruments.

Keyboard performer Michael Tsalka has won numerous prizes and awards throughout his career. A versatile musician, he performs solo and chamber music repertoire from the Early Baroque to Contemporary on the modern piano, harpsichord, fortepiano, clavichord, square piano and chamber organ. An active international performer and lecturer, he is currently preparing a critical edition of D.G. Türk’s 48 keyboard sonatas for Artaria Editions in New Zealand (www.artaria.com).

“These are discs to listen to from start to finish, and enjoy as one would stroll from artwork to artwork at an exhibition.” – Clavier Companion

“These are discs to listen to from start to finish, and enjoy as one would stroll from artwork to artwork at an exhibition.” – Clavichord International

“Michael Tsalka […] knows the oeuvre of the composer like no other, and performs the music congenially—sometimes playfully, then dreamily and pensively, and of course, with plenty of lively virtuosity.” – Bayerischer Rundfunk (Bavarian Radio)