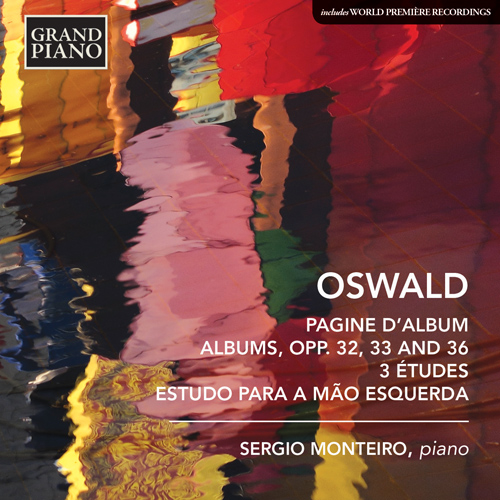 “Brazilian-born composer Henrique Oswald was one of the most important composers in South America in the late 19th century and early 20th Century. His music reveals an eclectic mixture of traditional and modern traits aligned with French traditions, and like the music of his friend Saint-Saëns, is not easy to contextualize within a single stylistic paradigm.” — Sergio Monteiro

Henrique Oswald was one of the most important composers in South America in the late 19th and early 20th centuries. His European-influenced music was suppressed by Brazilian nationalist sentiment in the 1930s and 40s, but on Oswald’s death Villa- Lobos described him as “the most admirable composer of this country”. This programme provides an excellent overview of his stylistic development, from the youthful, salon music aesthetic of Pagine d’album to the French impressionism of the Album Op. 36 and the masterful Trois Études.

This recording was made on a modern instrument: Steinway Model D 532464 Brazilian pianist Sergio Monteiro studied at the National Music School of Rio de Janeiro (Jose Henrique Duprat and Myrian Dauelsberg), and has also earned his Doctor of Musical at the Eastman School of Music in the United States, under Nelita True. He is a winner of several South american piano competitions, including the 2003 Martha Argerich International Piano Competition in Buenos Aires. He has performed in venues such as the Toronto Center for the Arts (Canada), the Konzerthaus and the Philharmonie (Berlin), the Teatro Colón (Buenos Aires), the Kennedy Center (Washington, D.C.) and the Martha Argerich Festival (Japan). In 2010 he was invited to join the Steinway Artists’ roster. Oswald trained a generation of pianists and composers and became one of the most influential figures in Brazilian musical life in the first part of the present century.

“All these miniatures are beautiful and exquisite, and this is an immensely enjoyable recital. The mood is generally congenial, sometimes melancholy, and without emotional extremes. …Monteiro plays well…” – American Record Guide

“Cendoya captures the rhythmic swagger and melodic verve that runs through all of these pieces with charming, easy fluency.” — CBC