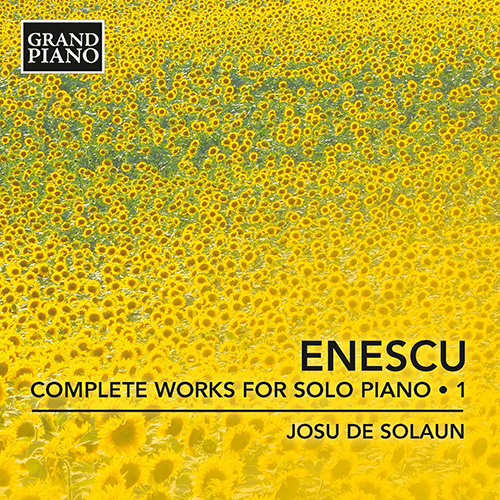 “Discovering Enescu´s music was a personal landmark event in my personal biography. I felt, for the first time since discovering "the greats” in my childhood - Bach, Beethoven, Mozart - that I was in the presence of one of the most fascinating minds in the history of music. His work moved me deeply and has left a profound footprint in my consciousness: its infinite richness and multi-layered craftsmanship, its message of hope, the depth of its utterance. I will never be the same after it.” — Josu de Solaun

This first of three discs devoted to George Enescu’s piano music presents three significant pieces. Indebted to Romanian folk music and in three large sections, the ruminative yet striking Nocturne in D flat is a work of shifting sonorities and moods. The Pièces impromptues, Op. 18 are independent, unrelated character pieces that illuminate once again the composer’s fascination with the indigenous music of Romania. The Sonata No. 1 in F sharp minor, Op. 24, No. 1 is – by contrast – a massive statement characterised by harmonic surprises, innovative techniques, insistent rhythms and, in the final, slow movement, the doina, a type of Romanian song at once contemplative, nostalgic and melancholic.

This recording was made on a modern instrument: Shigeru Kawai “…whether because of the unusual programme or the superb interpretations offered by Solaun, we are faced with a collection of music that needs to be listened to, an essential album that promises to delight even the most demanding music lover. ” – Melómano (Spain)

“…the upper voice (right hand) makes the notes sound as bright and clear as if precious pearls were presented on a velvet cloth. In contrast, the left hand bursts as an indeterminate threat in the deepest depth, which is supported by the extensive use of the pedal. The interpretation is never mawkish, despite great sound variations, but always stays under control.” – www.klassik.com

“I assure you that the results of this album are amazing.” – Ritmo

“Winner of both the Enescu and Iturbi International Piano Competitions, the Spanish pianist, Josu De Solaun brings clarity to Enescu’s density and shape where it is all too easy to meander. The first of three discs, the sound is outstanding, and I ask you to explore a unique musical voice that is unjustly neglected.” – David Denton