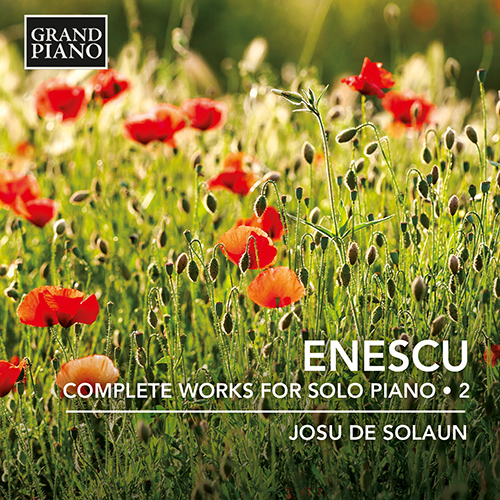 “Enescu’s Third Piano Sonata is a landmark in the history of writing for the piano. Its sheer inventiveness and enormous range of expression, from the boisterously rustic and joyful, to the utmost tragedy, from the bawdy and witty, to a sense of fragmentation akin to madness, it is a gift to all pianists from one of the most fertile imaginations of all times. No wonder it has been in the repertoire of many great pianists, such as Dinu Lipatti. The Suite in D Major, as well, stands as one of the great 20th century works for the instrument, a real treasury of both pianistic sumptuosness and bittersweet nostalgia.” — Josu de Solaun

The four works in this second of three volumes devoted to Enescu’s piano music range over a period of more than 30 years. The earliest is the joyful, ebullient Suite ‘Des cloches sonores’, Op. 10 which covers a wide expressive range including use of the melancholy Romanian song, the doina. The Piano Sonata No. 3, Op. 24 is a mercurial, puckish work, both spirited and contemplative, and the Pièce sur le nom de Fauré is a charming souvenir from one composer to another.

This recording was made on a modern instrument: Shigeru Kawai “…whether because of the unusual programme or the superb interpretations offered by Solaun, we are faced with a collection of music that needs to be listened to, an essential album that promises to delight even the most demanding music lover.” – Melómano (Spain)

“De Solaun is a wonderful pianist, especially in the colorful worlds of the Second Piano Suite. ” – American Record Guide

“The American-trained Spanish winner of both the Enescu and Iturbi International Piano Competitions, Josu De Solaun, will certainly make you shake your head in disbelief in the disc’s opening work, and throughout his technical brilliance is remarkable.” – David Denton

“Luckily, there are records, and pianists like Josu de Solaun and record labels like Grand Piano wanting to make known these treasures. Although I have not yet had the opportunity to hear the first volume of this integral, these two are of a level such that they deserve to be considered a reference in this repertoire.” – Ritmo