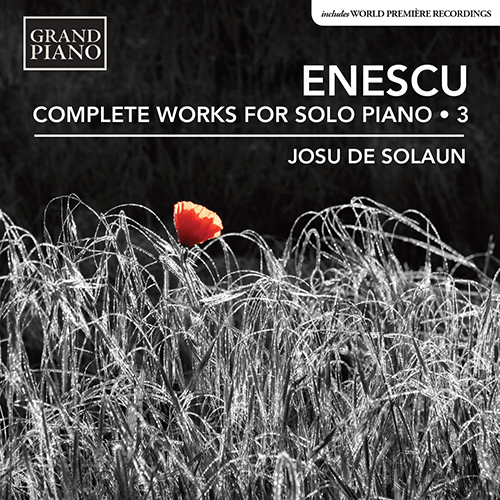 “This third and last installment of the complete works for piano by George Enescu features what one could call, in opposition to Rossini’s famous collection of pieces subtitled péchés de vieillesse (sins of old age), the Romanian composer’s péchés de jeunesse (sins of young age). However, these pieces, written in his very early days as a composer, show an audacity, breadth of purpose, and deep understanding of both Germanic and Gallic compositional traditions, that finds almost no equal with another composer of his age in the whole of the 19th and 20th centuries. Amidst Barcarolles, Romances, Preludes, Scherzos, and other such character pieces, a special favorite is the Suite Op. 3, written in what Enescu termed l’ancien style (the old style): Bach seen from the prism of turn-of-the-century Paris, a very different Bach indeed than the one we are now used to.” — Josu de Solaun

This third and final volume dedicated to Enescu’s piano works shows the unique blend of influences he acquired during his teenage years in Vienna and Paris. These start with his Brahms-like treatment of the piano as a symphonic instrument in the Scherzo and Ballade to the infusion of French late-Romanticism and Fauré in the Impromptus. The crowning achievement of these early compositions is the Suite dans le style ancien, Enescu’s first public solo piano opus, a stylised evocation of Bach seen through the prism of turn-of-the-century Paris. “…whether because of the unusual programme or the superb interpretations offered by Solaun, we are faced with a collection of music that needs to be listened to, an essential album that promises to delight even the most demanding music lover. ” – Melómano (Spain)

“De Solaun is a wonderful pianist, especially in the colorful worlds of the Second Piano Suite.” – American Record Guide

“If you have read my previous reviews in this series, you will recall how I have enjoyed the playing of the American-trained Spanish pianist, Josu De Solaun. If Grand Piano is going to plead the cause for long neglected music, you need such dedicated advocates. Technically he is outstanding, and, with a modicum of personal freedom, he has breathed life into the music. A hugely successful series.” – David Denton

“Technical virtuosity, color, originality and, above all, a musicality in abundance...The technical mastery of Solaun, but also his familiarity and empathy with these pieces, that allow him to go beyond the notes to...infuse them with life...makes listening to this music is a real pleasure. That being said, a reference that no music lover should miss.” – Ritmo

“Everything in these three discs is of the same quality, eloquence and poetry, virtuosity and sense of suggestion, mastery of form and, above all, an intimate understanding of the wandering, free, complex language of rhythms and harmonies that is the genius of Enescu ....How can these keyboard works still not be inscribed in the pantheon of the piano of the early twentieth century, next to those of Busoni, Rachmaninov, opposite the opus of Albéniz, Debussy and Ravel. Mystery.” – ARTAMAG’