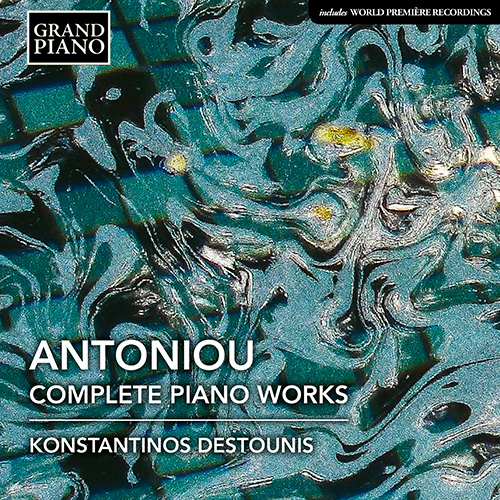 “Since my childhood I have been aware of Antoniou’s name, as one of the most significant living Greek composers. Later on, as I became exposed to his piano works, I was immediately taken by their dramatic nature, virtuosity, exploration of sound-colours and stylistic variety. These pieces had never been recorded before, so I felt that it is of vital importance to make them available to a worldwide audience. As a pianist I have been privileged to work closely with the composer himself; this has been the key to unlock the secrets of his music.” — Konstantinos Destounis

Theodore Antoniou is one of Greece’s most celebrated and prolific contemporary composers. His music integrates traditional Greek musical elements within styles ranging from the impressionism of Aquarelle to the virtuoso effects of Entrata, all approached in intuitive ways, and always with an underlying dramatic plot inspired by ancient Greek drama, resulting in the invention of ‘Abstract Programmatic Music.’ This programme was recorded in the presence of the composer, who considers Konstantinos Destounis ‘a phenomenon… a great interpreter of my complete piano works.’ Konstantinos Destounis (b. 1991 in Athens) is regarded as one of the most prominent Greek artists of his generation. He is a prizewinner in many international piano competitions, most notably the Grand Prix Maria Callas in Athens, the Southern Highlands in Canberra, the Giorgos Thymis in Thessaloniki and the Bremen European Piano Competition. As the winner of Greece’s national competition, he represented his country at the Eurovision Young Musicians Competition in Vienna.

His performing career has led him to prestigious venues, such as the Royal Albert Hall and St John’s Smith Square in London, La Fenice in Venice, Llewellyn Hall in Canberra, the Glocke Saal in Bremen, the Megaron in Athens and Thessaloniki. As a soloist he has performed with numerous orchestras in Greece, the UK, Germany, Spain and Australia. Theodore Antoniou, one of the most eminent and prolific contemporary musicians, had a distinguished career as composer, conductor, and professor of composition at Boston University. His works are numerous and varied in nature, ranging from operas and choral works to chamber music, from film and theatre music to solo instrumental pieces, his scores for theatre and film music alone numbering more than a hundred and fifty compositions.

“Destounis’s ardent, vivid and colourful pianism only enhances my positive response to Antoniou’s music, together with the composer’s justifiably enthusiastic endorsement.” – Gramophone

“For this work [Entrata] alone, which recalls Iannis Xenakis in its style, gesture and drama, it is worth buying this fantastic and strongly interpreted CD.” – Piano News

“Viktor Valkov plays with technical accomplishment, aplomb and a real sense of attunement to this music of his homeland.” — Fanfare