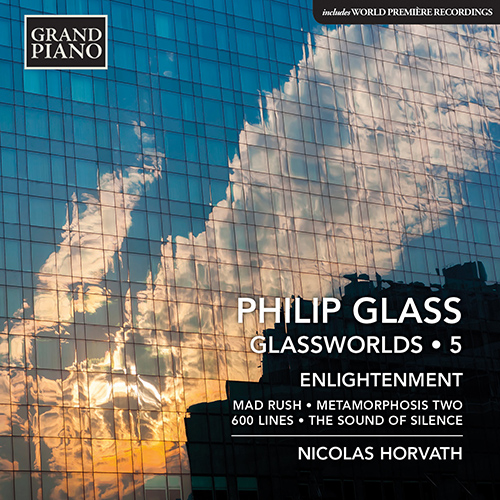 The works in this programme demonstrate Philip Glass’s perpetual goal of connecting with his audience. Taking shape as something like a hidden sonata form, Mad Rush contrasts peaceful atmosphere with tempestuousness and mesmerizing beauty. The last of its kind in Glass’s oeuvre, 600 Lines, here receiving its première recording on solo piano, is an obsessive and hypnotically restless toccata that represents the zenith of his experiences while working with Ravi Shankar. These two monumental works ate joined by première recordings of the subtly transformed Metamorphosis 2, and Glass’s only transcription in the form of Paul Simon’s The Sound of Silence.

“There is a purity that is astonishing and Horvath’s concentration does it full justice.” – International Piano

“Nicolas Horvath plays this music wonderfully well: warm and expressive or cold and mechanical as required. His notes are again excellent, and the Fazoli piano sounds glorious. If you appreciate all of Glass’s styles, then this will provide great satisfaction.” – MusicWeb International

“…Horvath plays this music with considerable attention to the dynamic level of every note, …Thus, it does not take long for the attentive listener to realize that, while the structures of the marks on the score page may be repetitive, the performance itself has a rhetorical shape of its own that enhances the surface structure of repetition with the deep structure of something more like a journey.” – The Rehearsal Studio

“The piano of Glass in technicolor: certainly unusual for fans of Glass but certainly absolutely convincing.” – ResMusica.com