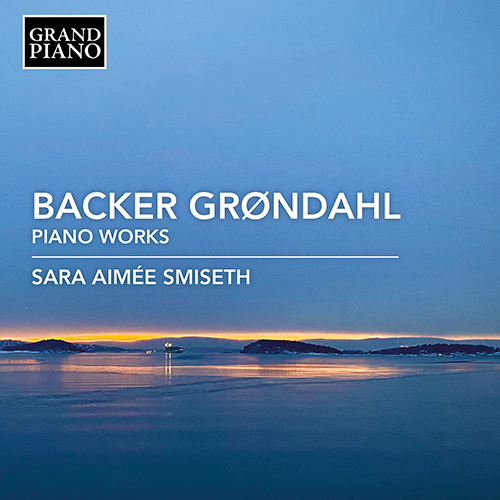 “George Bernard Shaw proclaimed Agathe Backer Grøndahl one of the century’s greatest pianists, yet she remains unknown for most people today. I am thrilled to be able to present this album, showing the world the wide array of Backer Grøndahl’s wonderfully poetic, virtuoso, and colourful piano works. One of my favourite pieces is I trollhallen (‘In the Hall of the Trolls’), from Backer Grøndahl’s Fairytale Suite, Op. 44, which is one of her many works for piano that is of a much larger format and has an orchestral quality to it. The Fairytale Suite is also the work that made music critic Pauline Hall call Backer Grøndahl “the first Norwegian impressionistic composer.” ” — Sara Aimée Smiseth

Hailed by George Bernard Shaw as one of the 19th century’s greatest virtuoso pianists, Agathe Backer Grøndahl was also a pioneer among women composers, juggling marriage, motherhood and an extensive career. She was taught by Liszt in Weimar, and as one of Norway’s most respected composer-pianists, created a large body of work that displays colourful stylistic variety and poetic breadth. The beautiful Sérénade from Trois Morceaux, Op. 15 may well be Backer Grøndahl’s most popular piano composition, but her concert études are virtuoso masterpieces – the folk-tune arrangements drawn from her Op. 30 and Op. 33 sets illustrate her perceptive absorption of her country’s folk music. The remarkable fairy-tale suite I blaafjellet, Op. 44 is possibly the first impressionist piece by a Norwegian composer. Sara Aimée Smiseth was born in 1986 in Oslo, Norway. She pursued her musical education at the Norwegian Academy of Music and the Royal Conservatory of Brussels with professors Einar Steen-Nøkleberg, Einar Henning Smebye and Jan Michiels. She also has a bachelor’s degree in musicology from the University of Oslo. She has toured Scandinavia as well as the United States and Canada giving lecture-recitals – a combination of virtuoso piano playing and captivating storytelling. She regularly plays with some of Norway’s foremost choirs and is also a pianist and a lecturer at the Norwegian National Opera and Ballet. This is her first recorded solo album. Agathe Backer Grøndahl was a pianist and composer of international stature. Born in Holmestrand, Norway, she took lessons with Hans von Bülow in Florence and Franz Liszt in Weimar. Her output contains over 400 songs, piano pieces and Norwegian folk song arrangements. The fleet-footed Humoresque in G minor from 3 Morceaux, Op. 15 (1882) is rhythmically witty, with natural charm and vitality.

“A real charmer and probably all the Grondahl you’ll ever want or need.” – American Record Guide

“A lot to enjoy!” — Helsingin Sanomat