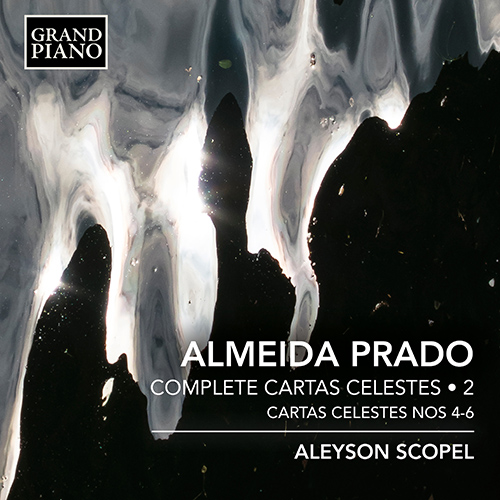 “The second volume of my survey of Cartas Celestes features numbers 4, 5 and 6. These were originally intended to be the last ones, as it was not until 15 years later that Prado would go back to the form. Thus, they close a first cycle, painting with sounds the remaining planets from our solar system, including the Earth in all its majesty in Cartas Celestes No. 6, and magically reintroducing all of them as heard in previous volumes in a Ciranda around the Sun. I remain constantly enchanted and intrigued by Prado's soundworld, who kept an innovative, scintillating and spellbinding approach to the instrument, achieving effects not previously thought or heard of.” — Aleyson Scopel

Cartas Celestes (Celestial Charts) is a colossal 18-movement cycle of works depicting celestial bodies to be seen in the Brazilian sky, for which Almeida Prado, one of Brazil’s most prolific and best-known composers, invented a new harmonic language called “transtonality”. Dense and rhythmically charged and saturated in the richest colours, Nos. 4, 5 and 6 complete the composer’s portrayal of the planets.

Brazilian pianist Aleyson Scopel is a recipient of the Nelson Freire and Magda Tagliaferro awards, and has also won numerous prizes in international competitions such as the William Kapell, Villa-Lobos, Corpus Christi, Kingsville and Southern Highland International Piano Competitions. Aleyson Scopel graduated with distinction in performance and academic honours from the New England Conservatory of Music, in Boston. During his years at the conservatory he studied with Patricia Zander and was also awarded the Blüthner prize. He then furthered his studies in Brazil with Celia Ottoni and Myrian Dauelsberg.

“…Scopel’s pianistic skills are extraordinary but it is primarily his intense identification with this music that makes the performances so great.” – The Art Music Lounge

“All these miniatures are beautiful and exquisite, and this is an immensely enjoyable recital. The mood is generally congenial, sometimes melancholy, and without emotional extremes. …Monteiro plays well…” — American Record Guide

“The music is ear opening and will most certainly appeal to the high-modernist audiophile.” — Gapplegate Classical-Modern Music Review