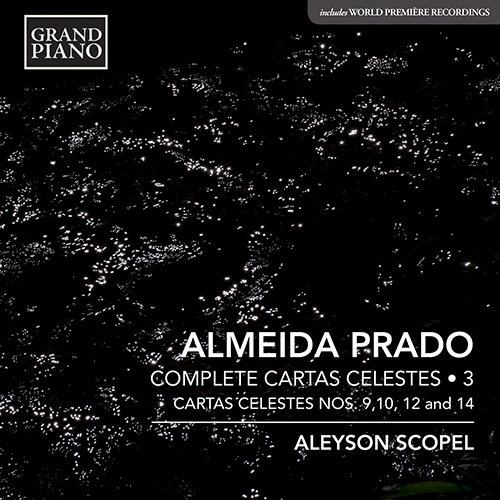 “As the Cartas Celestes progress, so does Almeida Prado's sound world and colour palette, reaching a highly transcendent and poetic view of the universe whilst integrating a new harmonic language. Perhaps more so than the initial six volumes, which formed a long arched unit, these works stand alone as individual pieces. They draw inspiration not only from the sky, but also from mythological and philosophical references, building up a fantastic continuation to the cycle. Recording them makes me understand the stylistic changes the composer underwent in the most profound way.” — Aleyson Scopel

Almeida Prado’s vast cycle of Cartas Celestes (Celestial Charts) depicts the celestial bodies visible in the Brazilian night sky during the four seasons of the year. As the cycle evolves so does Almeida Prado’s sound world and colour palette, reaching a highly transcendent and poetic view of the universe with an ever-evolving harmonic language that includes the composer’s own invented “transtonality”. The composer himself described Aleyson Scopel’s performances on Volume 1 [GP709] as “straight from heaven!”

Brazilian pianist Aleyson Scopel is a recipient of the Nelson Freire and Magda Tagliaferro awards, and has also won numerous prizes in international competitions such as the William Kapell, Villa-Lobos, Corpus Christi, Kingsville and Southern Highland International Piano Competitions. Aleyson Scopel graduated with distinction in performance and academic honours from the New England Conservatory of Music, in Boston. During his years at the conservatory he studied with Patricia Zander and was also awarded the Blüthner prize. He then furthered his studies in Brazil with Celia Ottoni and Myrian Dauelsberg.