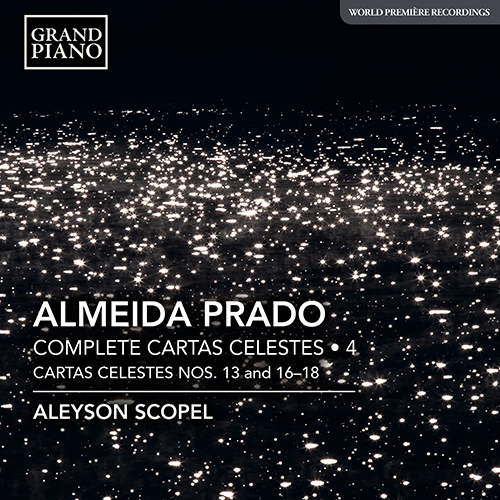 José Antônio Rezende de Almeida Prado referred to his vast set of 18 Cartas Celestes as an “incredible journey”, and the final three were completed just months before his death. Following the luminous Brazilian night skies of No. 13, the poetic references of the final trilogy refer to constellations named after animals, Grecian and Egyptian mythology, and one last homage to a pivotal figure in Brazilian literature. The is the final volume of Aleyson Scopel’s world première recording of the 15 Cartas Celestes for solo piano. Brazilian pianist Aleyson Scopel has performed worldwide in solo, chamber and concerto settings. A recipient of the Nelson Freire and Magda Tagliaferro awards, he has also won numerous prizes in international competitions such as the William Kapell, Villa-Lobos, Corpus Christi, Kingsville and Southern Highland International Piano Competitions. His performance of the first set of Cartas Celestes by Almeida Prado was thus received by the composer: ’It came straight from heaven! Meteor Showers, radiant constellations, glowing nebulae and a transcendental vitality marked the genial interpretation of this colossal pianist.’ Prado would later dedicate to Scopel the 15th set of the series. Aleyson Scopel graduated with distinction in performance and academic honours from the New England Conservatory of Music, in Boston.

“Pianist Scopel understands this very well, and indeed it takes a performer of imagination to play this music with convincing authority.” – The Art Music Lounge

“Scopel is a master of both mood and articulation, bringing out the structure of these pieces without over-emphasizing anything yet still making every note, even in the inner voices, audible to the listener. Quite simply, this is an astounding album.” — The Art Music Lounge