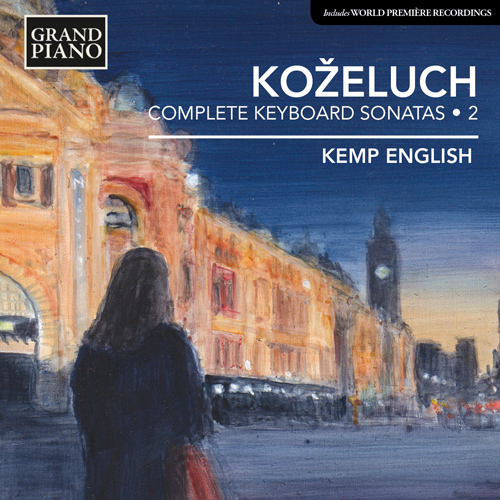 “This album offers a mixture of works from 1780 that exemplify Koželuch’s growing stature as a pioneer of the late eighteenth–century Viennese classical sonata. Sonatas Nos. 5 and 7, in A and D major, are beautiful examples of melodious and superbly crafted works, the kind of compositions William S. Newman described as "Models of Classic perfection in form, line and fluency". While the Sonata No. 6 in C minor, with its groundbreaking and recurring tragic–pathetic slow introduction, gives us a tantalising foretaste of Mozart’s C minor Fantasie (1785) and Beethoven’s Pathetique Sonata (1798/99). Rounding off the volume, the Sonata No. 8 in F major "La Chasse", frames an exquisite set of variations with two virtuoso outer movements.” — Kemp English

Leopold Koželuch, an eminent contemporary of Mozart and at the time considered by many to be the superior composer, was one of the first champions of the fortepiano, and his compositions for the instrument enshrined the highest qualities of Viennese style. Composed over nearly four decades his sonatas show progressive development, embracing lyrical melodies, delightful harmonic shifts, and foretastes of Romantic drama. They can be judged worthy to stand alongside those of Haydn, Dussek, Clementi and Mozart, and as a precursor to those of Beethoven.

“This is entertaining music, especially when played with English’s panache and vitality” – Early Music

“His [English] light and shade and finger clarity are superb. ” – New Zealand Listener