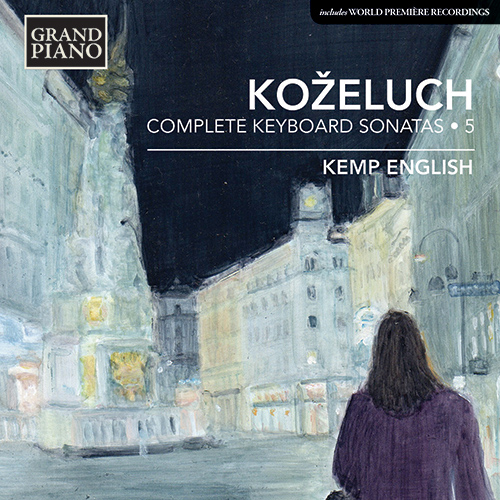 “Whilst Koželuch was definitely a composer who satisfied amateur tastes, he was also a skilled pedagogue, frequently providing music that would challenge the best of his aristocratic students. The sonatas contained in Volume 5 are no exception. These four sonatas demonstrate a sophistication and brilliance in technique and musical language that were truly ahead of their time, foreshadowing elements in Beethoven’s, Mendelssohn’s and Schubert’s own compositions.” — Kemp English

A native of Bohemia, Leopold Koželuch made his name in Vienna, a thriving musical centre dubbed ‘the land of the Clavier’ by Mozart. the sonatas in this volume all appeared in 1784, meeting the challenge of Mozart’s popularity head-on. Koželuch was singularly adept at producing what was considered the ideal fortepiano sonata of the time, his high reputation making him an influential supporter of a new instrument capable of accommodating ‘the clarity, the delicacy, the light and shade he demanded in music’.

“World premiere recordings of sonatas by a composer who in his day some considered better than Mozart. The music proves vivacious and soulful, and English’s playing is always engaging, often brilliant and sometimes electrifying.” – BBC Music Magazine

“…The performance is simply outstanding, and English has such an obvious yet easy empathy with the music played. The recording is first-rate and captures the sound of the instrument to absolute perfection.” – MusicWeb International